Lee Hodges fears his already threadbare Truro City squad could be about to disintegrate after the club entered administration this week. 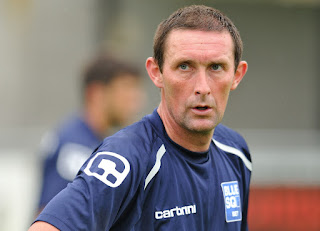 Already, goalkeeper Tim Sandercombe appears to be on the brink of leaving, after Blue Square North side Oxford City put in seven days' notice of approach for the Truro number one.

Hodges expects that if the goalkeeper decides to leave the financially-stricken Blue Square South club, then more could swiftly follow him.

"I cannot blame him if he decides to go," said a despondent Hodges. "He does not want to go, but he wants to get paid."

If Sandercombe does depart, then reserve team goalkeeper Luke Payne will probably take over between the sticks.

Hodges has already revealed that clubs are after his better players and believes there could be a mass exodus.

"I think if one or two start to go the rest could follow," he said.

So far, the players have remained remarkably loyal despite the seemingly never ending financial turmoil at the club. Their performances have been exemplary, but there is surely only so long that their patience will last if they are not being paid.

With the club going into administration there will be little, if any, money available.

And if Hodges is unable to field a competitive side, then he could well follow the players out of the door, along with his background staff.

But he is still hoping that it won't come to that, with City dropping to minus-two points when the ten point deduction is officially enforced, leaving them seven points from safety.

That is far from an insurmountable situation with a full squad, but any major departures will surely lead the club into freefall and near certain relegation.

"Hopefully someone will come in with some money so we can take club the club forward," he said.
With the club under a transfer embargo they can only bring in non-contract players and not pay them anything, which means it will be virtually impossible to bring in suitable reinforcements.

On Tuesday they travelled with just 14 players to Basingstoke Town, where they lost 3-2, and Dan Green suffered a suspected hamstring problem which makes him a doubt for Saturday's trip to Maidenhead. It is a grim situation and Hodges, who has worked miracles to keep the team competitive, admits he feels "let down".

But he has nothing but praise for the players. "They have been brilliant throughout," he said. "I could not have asked for anything more."
Posted by trurofans at 13:33