TISA Statement
Most Truro Fans will by now have heard about the sad situation resulting from the terrace chants last Saturday at the Dorchester game. The song in question is widely sung at Premiership grounds but the words were changed to unfortunately slant towards Kevin and he has quite rightly been deeply offended.
Brian Thompson, the TISA Chairman, deeply regretted the situation and apologized profusely to Mr. Heaney at half time.  It was only “intended as a joke” but the rationale behind the lyrics is now without doubt questionable to say the least.
The net result is that Brian Thompson has since confirmed that he is standing down as Chairman of TISA and is himself saddened by his actions and the subsequent fallout.  At this juncture, TISA would like to officially apologise to Kevin and Julia for any offence or hurt that may have been caused by anyone connected with our Association.
The TCFC Vice-Chairman, Chris Webb, has also now requested that any TISA branded items, including TISA shirts, scarves and badges not be worn to Treyew Road, as of this Saturday 3rd September.  Treyew Road gate security has been instructed to refuse entry to anyone wearing TISA merchandise.
Obviously a lot of long-standing, decent Truro City supporters and TISA members have also been upset by the whole sorry scenario, not least that we have all been ‘tarred with the same brush’ as those who caused offence. Sadly, it seems that many of the people singing the chants were not TISA members and during the second half, the singing was indeed raised to another level.  By then, several TISA members had departed the covered end.
The TISA committee is meeting at 11am this Saturday at the Railway Club, followed by a meeting for all members at 12 noon, Sat 3rd September.
Colin Carter
TISA Vice Chairman
Posted by trurofans at 16:39 No comments:

A week in football can be a long time and how this week has changed everything.  Nine points from 18 is not a bad position but the third loss on the bounce is a headache.
Western Morning News Match Report HERE 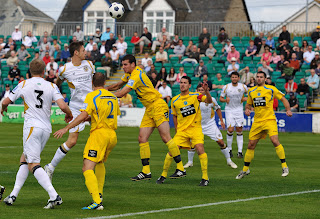 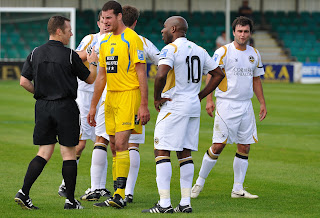 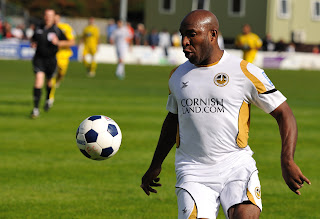 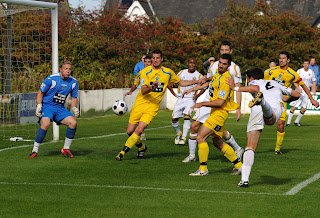 Posted by trurofans at 22:10 No comments:

Email ThisBlogThis!Share to TwitterShare to FacebookShare to Pinterest
Labels: Dorchester

A good day out [would have been a great day with a different result] and my thanks also to 'Driver-Brian' for our safe delivery and return.
A new place to visit for me. Havant didn't inspire me greatly on arrival with its high-rise flats and less than delightful shopping centre. As we found our way in the middle of a large estate a big flat green area emerged with what at first we thought was a maximum security prison right in the middle of it. High metal and brick walls on all 4 sides with an adornment of barbed wire and CCTV cameras. After parking in the large car park and making our way tentatively towards the prison walls we found a large opening into the inside and were warmly greeted and invited in by the Warders.
Never judge a book by its cover....
Inside the ground [delighted to say it was the ground and not a prison] it was a picture to behold. Bathed in sunshine the pitch looked immaculate. A briiliant ground with good cover and terracing on all 4 sides and one side having a large seated grandstand area. It all looked bright, well cared for and maintained with refreshment facilities at both ends and a large and welcoming Westleigh Pub attached.
The staff & fans were all friendly and helpfull and we enjoyed the moment doing our best to make as much noise as possible.
So - a good day out - with just 2 very 'Grey' factors - the disappointing team performance and the even more disappointing grey away strip.
Never mind - we will bounce back - and at least I have got the memories and experience of another new place and ground on our journey through the world of non-league football.
(Written by Polmeer).

Posted by trurofans at 16:39 No comments:

Posted by trurofans at 08:51 No comments: 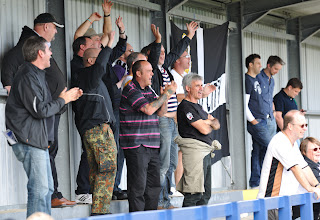 Posted by trurofans at 08:20 No comments: 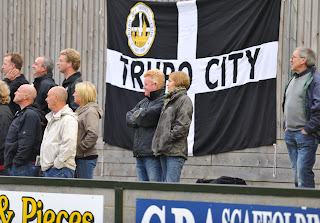 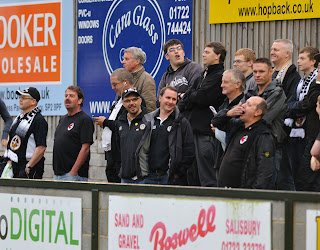 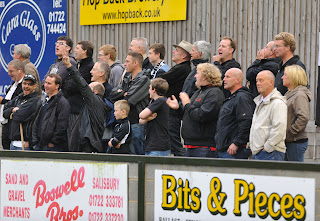 Posted by trurofans at 08:15 No comments:

A selection of images from the 2-1 loss last night at the Ray Mac stadium. 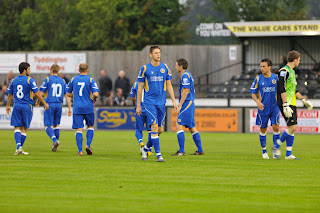 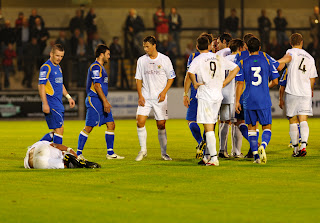 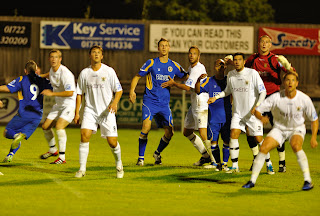 Posted by trurofans at 08:48 No comments:

We have made several important amendments to this site over the last few days, all of which will be welcomed by the two or three hundred of you who visit here daily!

All the additions can be found of the tabs link bar (in grey) on the top of this site.

The additions include a new Gallery, which is full size Image of the Week.  It will be the best image which sums up the game.

There is a new Fixtures & Stats page which is packed full of interactive and automatically updating stats, ideal for those saddo statto's amongst you. (This includes the web authors by the way).  Stats include Fixtures, Results, Attendances, League Progress in graph form, Sequences and a Match Grid.

For the players, there is a useful Appearances Table and  Goals Scored analysis.

The Tables also constantly change and automatically update, even through the match.  In effect, this is a live As It Happens table.  This is fantastic if you cannot get to the match and can only follow the game on the internet, while at work of course.  We only found this out last night when Basingstoke took the lead and temporarily went second in the table!

Further web site amendments are still in the pipeline, but for now this is as good as it gets.  The TISA supporter's club hope you find this info useful.  Don't forget TISA Membership is just £5 per annum.  Its main aim is to offer support to the Team via the supporter's club.  Danny Humphrys is the membership officer and he can be found near the bar on most Home and Away games.

Steve Rogers and Colin Carter.
Posted by trurofans at 08:09 No comments:

Images from the Dover Athletic match

Match Report by Rhod Mitchell
Images from the match, as it happened. 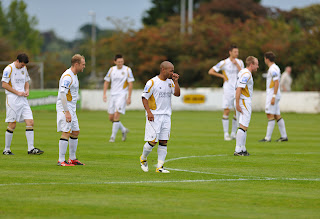 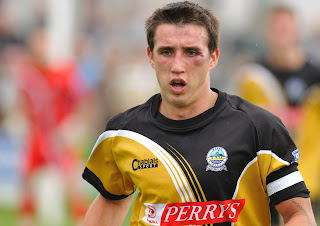 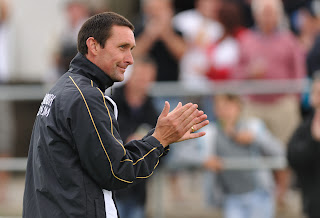 Posted by trurofans at 14:16 No comments: