This story has been released today by This is Plymouth.  Full story can be found on the link below:

Kevin Heaney is part of the secretive consortium poised to do a deal for administration-hit Plymouth Argyle, according to well-placed sources.

The Herald can reveal an offshore company called Bishop International Limited is the preferred bidder for the club.

This is Plymouth link
Posted by trurofans at 12:04 No comments:

Truro City chairman Kevin Heaney has reiterated his 'total commitment' to the club, despite confirmation of his involvement with an Irish consortium who are the preferred bidders for Plymouth Argyle.

The League Two club, who are in administration, issued a statement on Friday revealing that property developer Heaney had been approached to act as a property advisor to the consortium.

Part of the statement read: "Kevin has confirmed that his interest is property related only and that he will have no financial interest in Plymouth Argyle Football Club."

Under football governance rules no individual can have any involvement in the ownership or running of second club.  And Heaney, who had previously denied any connection with an Argyle takeover, confirmed to Briton Sport he would not be involved with the football side of Plymouth Argyle.

He said: "My only focus is Truro City as it has been for the past seven years.
"My only role at Argyle is as an advisor on the property side of the proposed deal. I was approached a couple of months ago asking if I could help and I was delighted to do so.

"I have nothing to hide. There have been a lot of lot lies spread about it all but I am just an advisor and was asked for my opinion.

"I love Truro and the people. We still have a lot to do in the next five years if we are to achieve the dream of making Truro City a professional club.

"We need a new stadium and to ensure the club have a lifetime income rather than rely on one individual.
"My determination to do that has not changed. My involvement at Argyle if everything goes ahead is just on the development side and not with the football side."

City, who play Argyle in a friendly at Home Park on Wednesday July 27, return to pre-season training next Thursday evening ahead of their first season in the Blue Square Bet South.
Posted by trurofans at 12:01 No comments:

Truro City chairman Kevin Heaney says it is crucial for the club's continued development that their proposed stadium be built as soon as possible.
A stadium site at Langarth Farm, near Threemilestone, in Cornwall has been earmarked that could also house the Cornish Pirates rugby club.
After seeing his side promoted to the Blue Square Bet South for next season, their fifth promotion in six years, Heaney says that without a stadium to match their ambitions, the club could go backwards very rapidly.
Heaney, who recently admitted to being part of a consortium vying for Plymouth Argyle told This is Cornwall: "I want us to become a full-time side in a couple of years, but without the stadium that won't happen.
"Wouldn't it be fantastic to have a full-time football team and a rugby side playing in the Premiership? But we need a stadium for that to happen and without it I fear the alternative is Armageddon for both clubs. Everyone is doing all they can to make sure that does not happen."
With regards to his involvement with Argyle, he told This is Plymouth: "They (the unnamed consortium) are talking to a number of developers and approached me to see if I would be interested. They came back to me to say 'would you, on our benefit, talk to the council to find out what the potential is?'.
"I feel proud and privileged to be asked but that's the only capacity I'm here in. I'm a football club chairman, I'm extremely happy and love Truro City."
The paper reports that the businessmen involved want to 'separate the club from its property by buying only the stadium and adjacent land'.
Truro City are currently based at Treyew Road which has a capacity of 3000.
Posted by trurofans at 07:56 No comments:


Kevin has now confirmed that he has been approached to participate in the property transaction as an advisor. As Kevin is already involved in professional football he cannot have any involvement in the ownership or running of a second club. Kevin has confirmed that his interest is property related only and that he will have no financial interest in Plymouth Argyle Football Club.


Link for more information is here:

Of interest to Truro Fans, sadly, the demise of Rushden and Diamonds FC this week has meant a reprieve from relegation for demoted club Thurrock.  The Diamonds' web site link and Club statement is found HERE

Thurrock FC now remain in the Blue Square Bet South league and their web site is now included on the Truro Fans site.  Bishop's Stortford now move to BSB North.
Posted by trurofans at 15:59 No comments:

Boost for City as Dan signs on

From 'This is Cornwall'


WINGER Dan Smith has ended fears that he would quit Truro City in the summer by agreeing a new contract with the Blue Square Bet South club.

As revealed in last week's Sport Briton, the 21-year-old former Plymouth Argyle player had been made a final offer to stay for a second season at Treyew Road.

And this week City boss Lee Hodges revealed that Smith, who made 34 starts last season scoring nine goals, had committed himself to the club.

Hodges said: "It is good news that Dan will be staying."

Now only right-back Barry McConnell, who had to give up his charity run from John O'Groats to Land's End because of a knee problem, has yet to confirm he will be staying at the club for a fourth season.

But Hodges is unconcerned, as he fully expects the former Exeter City defender to stay.

"I am certainly not looking for a new right back. Barry has been brilliant for us and is a seven out of ten every match."

Hodges also laughed off media speculation that he could be in line to take over as manager of his former club Torquay United following the departure of Paul Buckle to Bristol Rovers.

He said: "Someone told me I was 12-1 for the job, but while I am flattered to be linked with the job I certainly won't be wasting any money betting on myself. No one has been in touch at all.

"I have signed up for two years at Truro and am totally committed to the club so that is done and dusted. I really enjoyed my first season and although it is going to be twice as hard after being promoted I am really looking forward to it."

City's improved new status has again been illustrated after securing another prestigious pre-season friendly at home to league One side Yeovil Town on Saturday July 16 (3pm), for the first ever visit of the Somerset side to Treyew Road.

City have already agreed to play QPR, Plymouth Argyle and Torquay United.
And Hodges is delighted with the quality of games his side face as they prepare for their first season in Step 2.

Hodges said: "It is a fantastic pre-season programme and brilliant for the boys.

"I am especially looking forward to going back to Plymouth Argyle."
Posted by trurofans at 22:46 No comments: 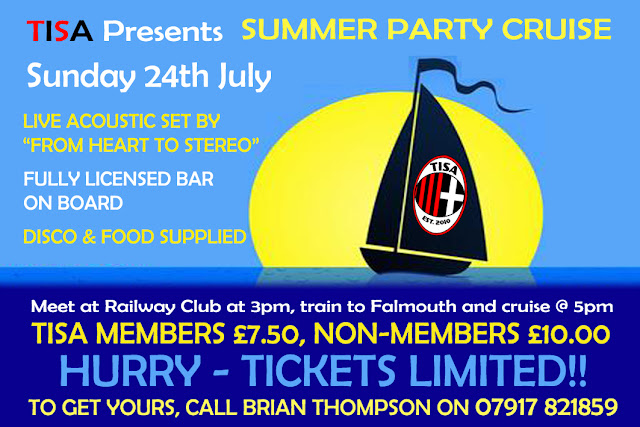 Posted by trurofans at 23:18 No comments: