An equaliser deep into stoppage time by skipper Jake Ash gave City a dramatic draw after they seemed to be heading for their second home Calor League premier division defeat in six days. 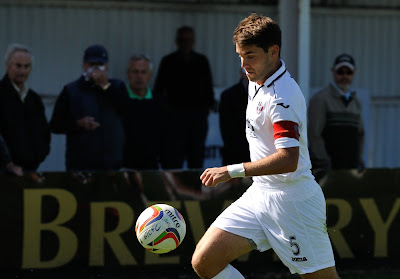 In the fourth minute of added time, City were trailing 1-0 to Rogan McGeorge’s first half goal, when Joe Broad’s free kick from the left fell to Ash, who swept a low drive past outstanding Hitchin keeper Tahj Bell and into the right hand corner to send the home fans wild.

It was probably no more than City deserved in an action-packed and entertaining end to end game, which was a world apart from the fare on offer in their previous game against Bideford.
Jordan Copp missed a penalty for City and Les Afful and substitute Liam Eddy also missed great openings, though at the other end it needed some excellent saves from Ollie Chenoweth to keep the home side in the game against an excellent Hitchin side.

Again, it was a much changed City team, with manager Steve Massey making five changes from the side that lost 2-0 to Bideford.

New signing from Tavistock, Paul Quinn, made his debut at left back, while Jordan Copp, Joe Broad and Afful all started, with Massey springing a surprise by playing Ash up front, the fourth position he has played in five games so far.

After a frantic opening in windy conditions, it was the Hertfordshire side who went ahead after 27 minutes when City failed to clear the ball and McGeorge fired home from inside the area.

City though should have been level right on half time when Afful was brought down in the area but Jordan Copp, saw his spot kick saved by Bell diving to his left.

It was tough on the youngster, who was probably the best City player in the first half.

After the break, both sides threatened with Chenoweth denying first Burns and then the talented Jamal Lowe.

At the other end, Bell did well to turn away a close range Afful header, with Ash volleying the loose ball wide.

And Eddy, who had come in for Matt Andrew, should have made it 1-1 when he rounded Bell but hit the post after taking the ball a fraction too wide.

As Truro pushed forward they left gaps at the back with Lowe hitting the bar and Chenoweth performing more heroics to allow Ash the chance to ensure City took something from the game.