A nerveless last minute penalty by Jordan Copp earned City a dramatic draw in the rain at Treyew Road in their opening Calor League premier division game of the season. 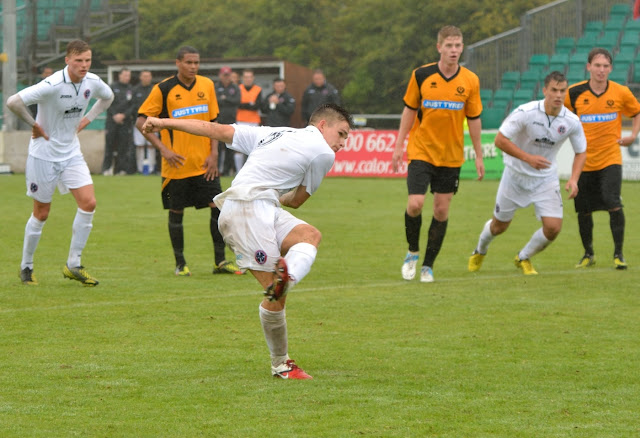 A new-look City side looked to be heading for defeat, as they trailed 2-1 with the game into the final minute.

But City skipper Jake Ash was then clipped from behind as he burst into the area and Copp showed great character to take the spot kick which he hammered into the roof of the net to send the majority of a crowd of more than 400 home happy.

It was no more than City deserved in a game which saw them go 2-1 down after taking the lead through Les Afful, though there will be much sterner tests to come.

In the first half, played in pretty miserable conditions, City, fielding four debutants in Dan Evans, Warren Daw, Jared Sims and Jed Harper-Penman, looked the more dangerous side with Liam Eddy a threat up front.

And they took the lead after 32 minutes, though in rather controversial style.

Ash played a long diagonal ball to Les Afful on the right and he looked to have fouled marker Jordan Jarrold, but referee Andrew Bennett allowed play to go on and Afful finished superbly shooting into the far corner, celebrating with a moonwalk.

The visitors' were incensed that the goal was allowed to stand and manager Lee Bearman took his protests too far and was sent to the stand.

City needed to hold on to their lead until half time and were indebted to keeper Olly Chenoweth, who denied Jordan Davis an equaliser, but he was then beaten just before half time when Andrew Phillips was allowed to burst through the home defence and find the empty net.

And buoyed by the goal Bedford started the second half the better and went 2-1 ahead after 53 minutes when a long free-kick from the right by Jarrold was allowed to bounce into the roof of the City net.

It was a body blow and for a time City looked likely to concede a third before regaining their composure, with Shane White desperately unlucky not to equalise when his fierce strike rattled the bar.

City huffed and puffed, but looked to be running out of time until that last gasp penalty at least gave them a share of the spoils.