"What a great shame that in front of a crowd of 527, it wasn’t exactly the Bank Holiday Monday Classic that we were all looking forward to enjoying"!
The full match report on "We have to keep the belief " from manager Steve Massey after City's first defeat by Dave Deacon .  Full report here > Match report

Images below showing all the pushing and shoving (by Steve Rogers). 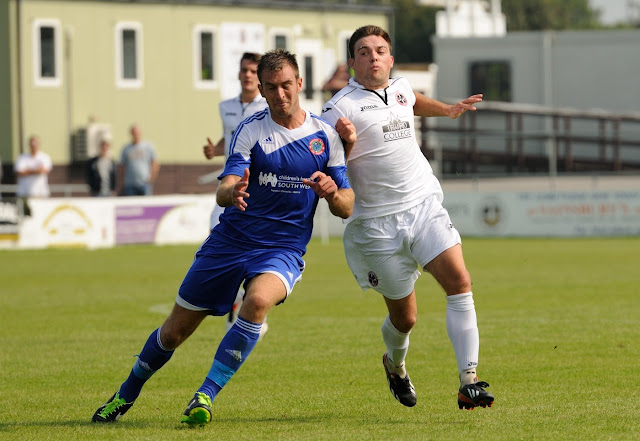 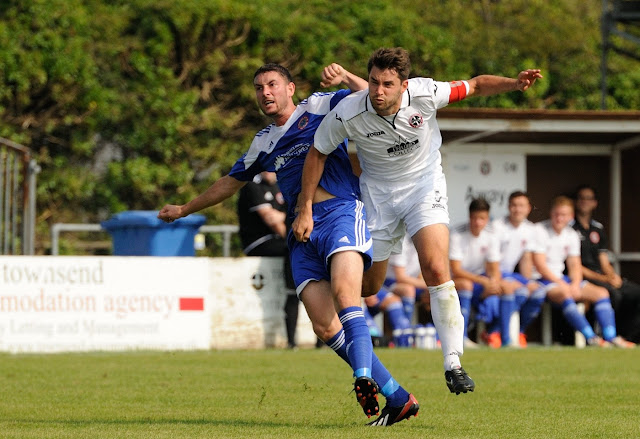 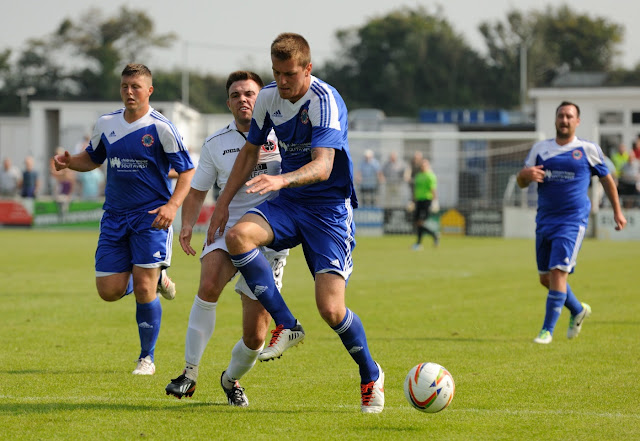 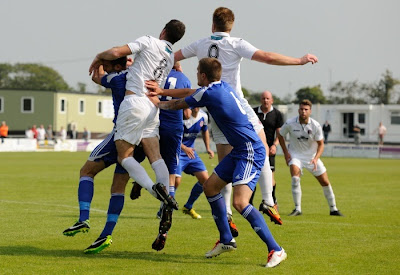 
Not really a fair result, 2 teams that cancelled each other out and neither team looked like scoring.  Both goals were gifts really, indecision at the back allowing their player to nip in and push it past the keeper and a soft free kick near the end, Truro didn't really defend it well, i think they were gambling on a breakaway by not bringing players back.

The most disappointing aspect of the game was the continuous moaning and harrasing of the referee by the Bideford players.  He was usually surrounded by several players, often placing their hands on him after every decision, constantly trying to get Truro players booked.  It was the worst i have seen at Treyew road in a long time.  After one incident the Bideford players rushed over and pushed their own player back down onto the ground.  The worst sportsmanship i have seen really at this level.

It was a travesty that we finished with 10 players and they didn't, in fairness the referee really wasn't up to this kind of intimidation.

On the football front we never really looked like getting a goal, we are playing a lot of high balls up to Eddy and Coombes who aren't tall enough to get much from them, i would like to see more ball to feet, the one time Liam got in, it was a through ball into his feet, otherwise he will get mugged by these bruisers every week.

Never a dull moment and looking forward to the next game, i am sure the players will continue to learn and improve as the season goes on and i am delighted that we are so competitive at this level.  With a stronger ref we might have got something out of this game.
DUTY281 wrote:
I thought Bideford were a disgrace in truth. Never interested in playing football, they much preferred to intimidate the referee and wind up our players. With better experience, we may of overcome that, but we didn't and we sank to their level. A shameful display of diving (leading to our red card), time-wasting (even when they were 2 up and we had 10 men), and surrounding the referee.

Glad we only have to play that lot once more this season.

Well said I was hellish at final whistle, I shouted abuse to the goalie as he was goading the Truro fans, I know I should've turned the other cheek, but 90 minutes of blatant cheating and bullying was a disgrace.


From the very first whistle they had one game plan,and that was to get as many Truro players booked or sent off as they could.In the first half when a Truro player was ruled offside and miss hit his cross towards the goal the ref was surrounded by 3 biddy players asking the ref to book him,and he did.

Mind you,I don't think we played very well at all today,far too many balls played in the air,and in most cases coming 2nd best.Our big number 9 was no help to Liam Eddy at all,with his size and and height he should have been holding the ball up and feeding the more mobile Liam,just like Barry Hayles did for Watto.

To be quite honest I don't think I have ever left a game at Treyew Rd so frustrated at what I saw.

I know it might sound nasty,but I don't think I can remember such an unsporting team as Bideford for many years.  All I can say is that I wish Bideford all the bad luck for the rest of the season.