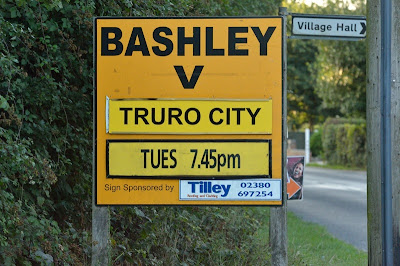 STEWART Kearn and Paul Gazzard endured an eventful home managerial debut as Bashley battled back from two down to share the spoils with Truro City – despite scoring all four goals.

The crazy clash also featured controversial refereeing decisions, a player’s dad running the line and a late injury to Truro’s Warren Daw which brought a sour end to a pulsating contest.

Referee Adrian Tranter upset the home crowd after being unmoved when Tim Sills was seemingly upended by City defender Dan Evans, only for Truro to break and score with Gary Middleton bundling into his own net.

But Bash were second best as the game went on and it came as no surprise when Jared Sims’s wayward shot was deflected into his own net by Brad Morris.

However, Jack Odam grabbed a lifeline by scoring on the stroke of half-time before Sills capped a tenacious second-half display with a late leveller.

Daw then sustained a dislocated elbow and after consulting both managers, Tranter called a halt to proceedings with the match already deep into injury time.

Bashley’s joint-boss Kearn said: “You never want to see a game end that way and, fair play to the ref, it was injury time and he asked us if we wanted to knock it on the head.

"I firmly believe there was no blame to be apportioned anywhere. It was unfortunate and we wish the lad all the best.”

On the match, Kearn added: “It was a shame we didn’t score all the goals at the right end!

"I was more disappointed with the first because the lad got in a cross which we should have stopped, but the second one was just a freak goal.

“It was fiery at times but that is what we are trying to get into the lads. We want to get into teams and force mistakes. We haven’t seen that fight and desire from a Bashley team for a while and I think people appreciated that.”


Images by Steve Rogers (sorry there weren't more, but the game was so exciting I forgot to take the shots).