"Bring on Saturday, it can't come quick enough for me and the lads, and let's get back to footballing matters!" 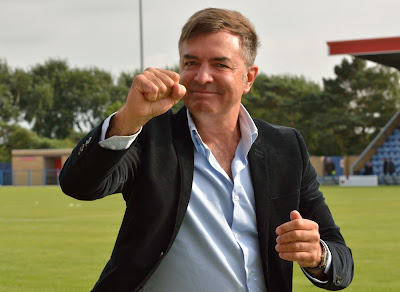 That's the battle cry from manager Steve Massey as Truro City look to put behind them their first defeat of the season.
Les Afull faces another fitness test although it's hopeful this time he will be ok. Also coming back into contention, from his holiday, is Neil Slateford while goalkeeper Ollie Chenoweth is also back.
Jed Harper Penman has been released and the club thanks him for all his efforts and hard work while with the club.
There has been much said about the spoiling and negative tactics employed against the team in Monday's encounter against Devon rivals Bideford, but the focus is now well and truly on collecting all three points and getting back to winning ways on Saturday against Hitchin Town.
Hitchin have made a wonderful start to the season, winning three of their four games. However, Truro manager Steve Massey was bullish and upbeat about their chances this Saturday: "We are all looking forward to the game. Unlike Bideford on Monday,  Hitchin like to play football, so it should be, for the spectator at least, much better on the eye then the last game!"
Massey went on to say "We trained well on Wednesday and there is an air of confidence about the lads and belief that we will give a great account of ourselves, and give the supporters something they can be proud of - a winning team."
Finishing off he commented  "This league is an extremely difficult, physical and hard one. There are no easy games, and although the lads unfortunately tasted defeat for the first time on Monday, we have a team both on and off the pitch that is without doubt going in the right direction".
So with that in mind, get yourselves to Treyew Rd on Saturday, the team and the players would love to hear you and see you in your hundreds once more.
Keep the belief, keep PATIENT and above all else keep supporting.
Together we are strong and together we can AND will achieve.
Posted by trurofans at 17:50