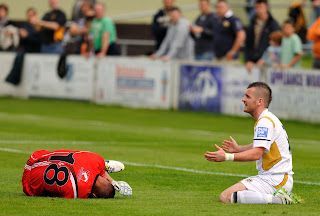 News emerging tonight from Treyew Road will not be easy to digest.  Club talisman and leading goal scorer Stewart Yetton was apparently involved in a training ground incident last night with defender Ben Gerring.  It is believed that Gerring sustained a broken jaw and is awaiting treatment in hospital.


A statement issued tonight from Chairman Peter Masters read: "Following an internal incident it has been necessary to suspend Stewart Yetton with immediate effect.

"Given that there are only three games remaining, regretfully Stewart has played his last game for Truro City. Also Ben Gerring has sustained an injury and is unavailable tomorrow."

Futhermore, if the training ground bust-up was not enough, Yettsy is also rumoured to be joining Southern League outfit Weymouth Town this Summer.

Yettsy is the club's all-time record goal scorer with a massive 226 goals in 315 games.  After returning from a long injury lay off this season, Stewart has already scored three goals in three games and made at least one assist.  Single-handedly, he is one of the reasons for the club's late resurgence. This is indeed a very sad way to end a career at a club he clearly loved.  For sure, he will be sorely missed.