After an explosive start, which saw them go 2-0 up in less than four minutes, City were in the end grateful for a late Paul Kendall equaliser to claim a point from their final home Blue Square Bet South game of the season. 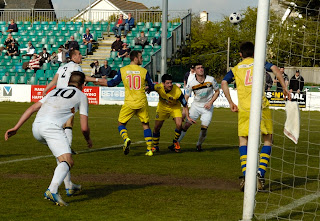 It had all looked so good for already relegated City, as Matt Wright got them off to the perfect start with his first goal for the club after just 75 seconds, when he ran onto a Les Afful long ball and found the far corner with an assured finish.


Wright, who was making only his second start, after coming in for the injured Andy Watkins, then doubled his tally two minutes later, pouncing on some poor Farnborough defending to force the ball home for City's second. 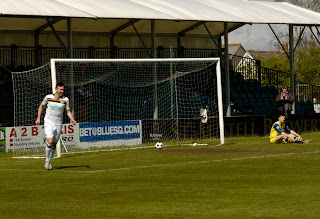 But the home side, who gave a debut to former Torquay United apprentice James Washburn (18) at right back, with 16-year-old Penryn College student Connor Davey on the bench, then seemed to stop playing.

And this allowed the visitors to take command and only some desperate defending and fine saves from Paul Hider preserved their advantage.

But it couldn't last and after 29 minutes Elvis Hammond slid home Phil Page's low cross from the left.

Farnborough were deservedly level after 38 minutes when the dangerous Dan Bennett set up Richard Peniket for the equaliser as City were fortunate to go into half time on level terms.

The second half was nowhere near as eventful, but Farnborough looked the more dangerous and with eight minutes left took the lead with a low shot from substitute Tom McGarry through a crowded area.

It looked all up for the home side, but Kendall gave them a point when he rose well to head into the far corner from a deep free-kick by Martin Watts.

It was the big defender's first goal for the club.

As the players left the field for the last time at Treyew Road this season they received great applause from the home fans, though how many of the squad will be back next season is still uncertain.