Truro City manager Lee Hodges said he was happy with the performance of his team in the 3-1 defeat by Eastleigh. 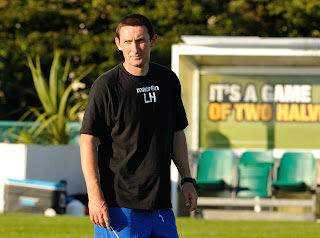 "I thought we played ever so well, it was a really good team performance," Hodges told BBC Radio Cornwall.

"We lost two goals from about 25 yards out and whilst we're disappointed to concede we did create some chances against a big strong team who will be thereabouts come the end of the year."

They doubled their advantage when Craig McAllister pounced on a poor back header to round Truro goalkeeper Luke Payne.

Reason's sublime 25-yard lob made it three before Stewart Yetton made the most of a poor back pass to give the White Tigers a consolation.

"It's crazy how football turns out," Hodges added. "On Saturday I was bitterly disappointed with the draw against Eastbourne yet I'm pleased with last night's performance even though we lost."

Truro have four games remaining in a difficult Blue Square Bet South campaign that has seen them deducted 10 points for entering administration.
Posted by trurofans at 07:57