Source: This is Cornwall LINK 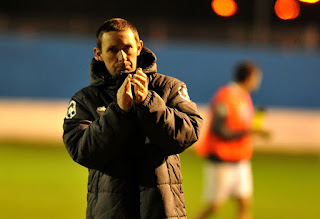 Today (3pm), Truro host mid-table Tonbridge Angels and then next Tuesday they hope to stage their rescheduled match at home to high-flying Dover Athletic (7pm).

Third-placed Dover were due to play Truro last Tuesday but the fixture was put back a week as the Treyew Road pitch was waterlogged.

Hodges – who is freed to start again today as new assistant manager Martin Jones takes over touchline duties – admits December is a "massive month" for the crisis-hit Cornish club, still in administration and nine points adrift at the foot of the table.

Transfer-embargoed City start the day 16 points behind 13th-placed Tonbridge but – considering all that has happened to them on and off the field – buoyed by a 3-2 win last time out at Treyew, against AFC Hornchurch back on November 3.

On the field, City's tight-knit threadbare squad can cling to a glimmer of hope because of that win. At the time Hornchurch were second from bottom, 21st, now they are 18th.

Hodges said: "Regardless of all that has happened, the one thing I do know is that the boys that pull on a Truro shirt on match day will also roll their sleeves up and give it everything they have got.

"If there's one thing I know it's that, because we have all been through hell of a lot together. If there is any group of lads who are going to get off the bottom – after all we have been through – then it's this group," the City boss added.

"We know we have a mountain to climb, we don't have to look at the league table to know that. I also know we have got eight games in December and we need to start winning some of them so we are in touch in the New Year.

"It's a massive ask, but it always has been and once we get on the pitch all that goes out the window and the boys give everything.

"Obviously we could do with more bodies to help out, and I'm sure over the coming weeks we will need them, but we have to take it one game at a time and this time around it's Tonbridge, which is a real tough one.

"On the plus side we have got home advantage, and fantastic supporters, so it's up to us to make that count. It's an old story, but we really need to win as many of our home games as we can to give ourselves a chance," added Hodges, whose former Plymouth Argyle team-mate Luke McCormick is due to make his home debut in goal for Truro this afternoon.