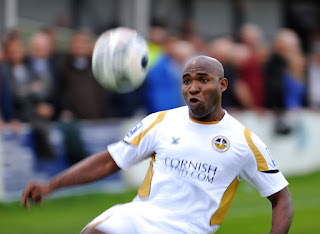 Lee has re-signed striker BARRY HAYLES in time for tomorrow's home league match against Maidenhead United (3 pm). He has joined from St Albans City, in the Southern League Premier Division, and will play on an expenses-only basis, travelling down from his home in the London area.

"Barry never wanted to leave us back in the close season," says Lee. "Now he just wants to be able to help us as much as possible again, and this will be a great boost for everyone. He's an absolute legend and a tremendous asset for the club on and off the field.

"I've kept in touch with him; he's been in and out of the St Albans side and has scored around eight goals for them. I'm tempted to say the boys don't need any more inspiring because they're already turning in brilliant performances week in week out, but there's no doubt Barry's experience and personality will help them even more."

Pitch is currently heavy after today's rain - "but as things currently stand the signs are all good, so it looks like game on," says Lee.
Posted by trurofans at 11:16