Barry Hayles is back to aid Truro City's escape bid

Source: This is Cornwall 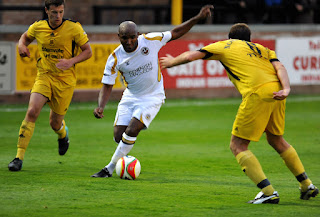 The 40-year-old former Plymouth Argyle striker is set to return to the Truro squad after a spell at Southern League Premier side St Albans City.

Hodges said: "Barry is coming back to help us out. It's a massive boost and has really lifted me and I am sure all the fans and the players will be the same once they get to hear Baz is back. He will come straight into the squad and hopefully will have a big part to play in the game."

Try as he might, Hodges cannot play down the significance of today's match

against Maidenhead.
Transfer-embargoed Truro are bottom of the 22-team Conference South table following a ten-point deduction for entering administration. Third-from-bottom Maidenhead are on 18 points, ten ahead of Truro.

On the eve of today's big game, Hodges said: "We kicked off the month with the 2-0 home win over Tonbridge, had the loss to Dover and then last week's goalless draw at Boreham Wood last Saturday.

"The performances have been really pleasing and what has really given me hope is that in two of those games we have kept two clean sheets.

"We had to battle for the win against Tonbridge, deserved more against Dover and I think the result was just about right at Tonbridge last week, although there would have been few arguments if we had won."

Hodges – who waits on the fitness

of target man Kieffer Moore but welcomes back defender Calron Hall – said: "I could try and play down the importance of the game but I have got to admit ever since Tuesday all I have been able to do is think about this Maidenhead game. Whichever way you look at it – and I keep looking at the league table – it is a massive game for us.

"There are a so many 'ifs' involved in this one and all the clichés come rolling out but I keep thinking if we were to get three points then it closes the gap down to seven points."
Posted by trurofans at 11:28