Truro City - a common tale - as appeared on the CRO today

A View From a Truro City Supporter

When Truro City AFC was minutes from going out of existence back in 2004, we owed a huge debt of gratitude to Kevin Heaney for saving us, and to 'Mr Truro' himself, Chris Webb, for approaching him to do so.

Little did we know then what the enormity of that debt would be.


Some were very suspicious from the start of Kevin Heaney's reign as Chairman and owner. The man undoubtedly loved football, but also a “successful” property developer, at least on paper, and in the papers' Rich Lists.

Why would he want to save a club in deepest Cornwall he had no previous interest in?


It was soon apparent that the Treyew Road ground, home to Truro City - given to the good Citizens of Truro and protected by a Covenant since the 1950s - was the motive behind his apparently generous gesture.

In December 2004 a lease was granted by the Trustees to Kevin Heaney, and then on 21st September 2007 the terms of the lease were varied to sign the freehold over to him. No surprise then that just four days later a charge was placed on the ground by Lloyds' Bank. (Ed. note: Remember them, Bears?) He had taken what amounted to a massive mortgage out on Treyew Road.

All the talk of financing the club from his largess was utterly false. The assets which had been in place for decades were now being stripped to fund the team and goodness knows what else was ripped away from the club. It certainly wasn't going back into the club itself.


Whilst the team enjoyed promotion after promotion - breaking all national records in the process and an FA Vase Final victory at the new Wembley against Totton - the Treyew Road site stayed in the dark ages, with improvements only being made to satisfy ground grading regulations, a sure indication that his 'end game' didn't involve football being played at Treyew Road, a very prime piece of land in Truro.
By now 'Mr Truro' Chris Webb was embroiled in the web of lies and deceit. What had initially been a last ditch plea for help had now become a potential money spinner for the pair of them, with the very existence of our club in the balance


Kevin Heaney was a main protagonist in the 'Stadium for Cornwall' project. This was of course as he didn't want progression for the club in their longtime home as he wanted to get Truro City out of Treyew Road so the site could be developed.


During this time, his dictatorship showed no ends. Many people, most lifetime fans who had volunteered their free time at the club, left because of his questionable dealings and actions towards them and others. Most have still stayed away to this day because of him.


We had become one of the most hated clubs around during his reign as local companies after local companies had to chase money owed to them from non-payment. The old official supporters club was disbanded by Heaney as the supporters' tea/food hut (which was a non profit making hut) was stopped and outside caterers came into the club for match days. 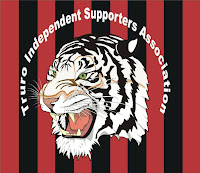 A new Truro Independent Supporters Association was formed which kept the fans together and arranged away day travel. This didn't go down to well with the man at the top as he couldn't control us nor touch any money raised by us. We had become the only voice speaking out against his dealings.


Kevin Heaney's final crass act against us - the fans, his 'customers' - with the realisation that his time was up was to sell the ground for over two-million quid, remove himself from his directorship of all his companies (leaving his Russian girlfriend as director) and going bankrupt.


The only possibility of the club being handed over when he sold the ground was again ruined by him, a bit of It's my ball and if I can't play with it then nobody can. A deal was in place to see the club move forward but he and his 'new' club Chairman, Chris Webb, made sure it didn't happen. In fact, Chris 'Mr Truro' Webb himself told the players, ''We would rather see the club back in Step 7 [of the English football pyramid] than hand it over to anyone else.”


The players have had to contend with numerous non and late payments of wages and bonuses, yet they have remained loyal to the club due to the great bond they have with us fans. After enduring years of ill treatment it's still amazing how they have stuck around. That shows the bond we have.


So here we are today. No ground ownership, in debt, the players are our only assets, and with very little hope. The Heaney Factor is still haunting us and holding many people back as they believe he is still in some control even though we are in administration. The fans have been brilliant and with the larger football family showing great affection and willingness to help, all are working wonders to try and save the club and our proud 123 years history from going down the drain.


Whether we will succeed in survival is anyone's guess, but we will keep trying.

David added in his email to me, “We are a very proud bunch of what you would call, proper fans. The buzz is amazing in what you are doing for us, as we have a very large contingent of Rangers fans. The whole Britishness and patriotism is so highly regarded. We have many lads here that have been around football in this country and abroad with the teams and clubs such as England, Chelsea, West Ham, Millwall, Spurs, Leeds, Newcastle, Gillingham, Plymouth, Arsenal, Barnet, Watford, Linfield, etc etc. All very proud people. Proper fans that all meet and follow the mighty Truro as now we live in Cornwall and it's football how it should be.”

The CRO's page for donations is up and running. You can chip in either five or ten quid to help save ths club for its community and supporters.
Posted by trurofans at 18:07