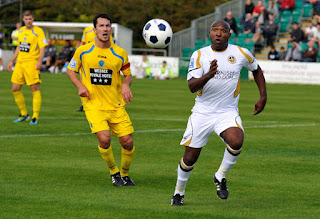 After much summer speculation, it looks like Barry Hayles has finally departed Truro City.  After an initial dalliance with Salisbury City this summer, Chesham United fans have been lauding up two goals scored by Barrington "on his debut" last night against Berkhampstead.  With sparse information coming from Treyew Road, Truro Fans will be disappointed to hear of another key player exiting the club.  One guess only for the reason?
Posted by trurofans at 07:48