City put troubles behind them to claim morale boosting win

By Rhod Mitchell - ThisisCornwall
A superb team performance saw Truro City earn only their fourth home Blue Square Bet South win of the season  and gave  the club a much needed boost after a difficult few weeks. 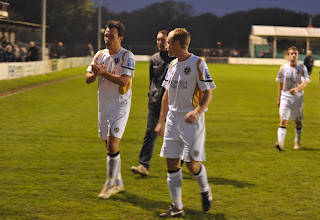 It was a terrific display against the high-flying visitors, especially as there had been midweek fears that the game might not even go ahead because the players and manager Lee Hodges had not been paid for more than two months.
But following a meeting between club chairman Kevin Heaney and the squad in the morning, that issue hopefully  seems to have been resolved  and the players responded with a totally  committed display in a  cracking game  before a crowd of more than 650 at Treyew Road.
It was the visitors who started the better, but City soon started to threaten with Les Afful having strong claims for a penalty turned down and skipper Jake Ash denied by the post before Afful gave them the lead after 21 minutes with a low drive from the edge of the area for his fifth goal of the season.
Afful was denied a second goal by a  superb goalline clearance from Ben Judge, with Andy Watkins also hitting the post as City went in just 1-0 at half time
.
In the second half  the Angels started to pile on the pressure with Kayne McLaggan shooting wide.
Truro had to largely  rely on the counter attack and both Watkins and Stewart Yetton might have done better with good openings. 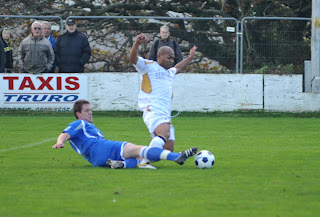 In the closing stages a tiring  City had to dig really deep  and the home goal enjoyed  several narrow escapes, especially  when referee Richard Martin awarded the visitors a stoppage time indirect  free-kick just inside the area  after harshly penalising City keeper Tim Sandercombe for time wasting.
And it was not until the final minute of stoppage time that the home fans could relax when  Dan Smith broke down the left before crossing for fellow subtitute Ed Palmer  to score his first goal for the club and send the home fans wild.

After the game it was revealed that midfielders Andy Taylor and Danny Clay are to leave the club.