A fantastic result winning 2-1 away! 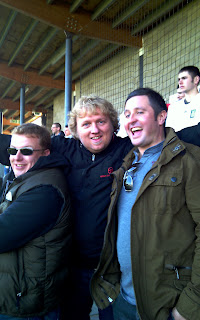 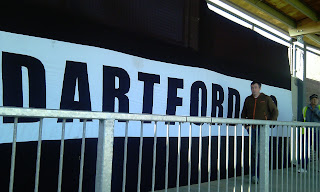 Forum comments:
Essex Boy
We played well today, We dominated the first half with Watto bossing the right wing. The second half went more Dartford's way but the defence was immense. Special mention to Ed Palmer who really did himself credit today and in most of Truro support was man of the match.

The one sour note was the ridiculous sending off of Joe Broad. He did nothing to deserve it whatsoever. Apparently the lino said to the ref that Blue 14 (we had made no substitutions) and White 7 (at least 50 yards away) were involved the incident. The ref was a substitute after the original pulled a muscle in the first half so it seems he was out of his depth.

About 30 Truro fans in attendance who made a lot of noise and out sang the Dartford fans throughout the game.

A special mention for the Dartford ground. What a fantastic place. Great view, brilliant facilities and a good bar with friendly staff and supporters. A fine day out.

Mid Cornwall White:
Looks like full credit to Hodgy must go for his team line up today.
Without Pugh and Marcus Martin it's good to see Hayles, Yetton Walker and Afful starting - shows the positive intentions to get a result from the start.
Oh yes - And Hodgey has named himself has sub - welcome back Hodgey !
Andy (Scott) Walker down to being a sub - a few dicey performances lately but the rest should do him good and I'm sure he'll be back firing on all cylinders soon.
I tell you, on our day we can defeat anyone in this division - Not counting my chickens just yet but with Stevie Adams back hopefully the team will concede less.
As I speak Yetton just missed a good chance - Half Time delayed by about 8 minutes - come on City !!!

Amazing result, Dartford had a 100 percent home record before today.
White Tiger:
After yet another trying few days off the pitch dispite injuries and suspensions and having ten men for the last 20 minutes I agree best result of the season so far.
Thats get right behind the team again on Tuesday night when we play a certain Farnborough.

SomersetSpur:
Bloody fantasic result.
This team never ceases to amaze me.
After last weeks result and all the off field antics,
Lee Hodges and the boys go and get a result like that.
Well if the boys have'nt been paid for a while,they
certainly deserve their wages this week. 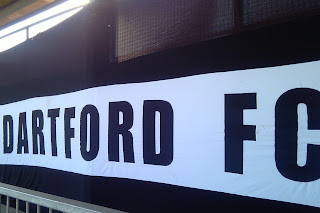 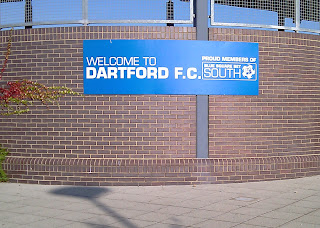 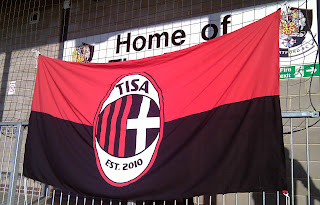 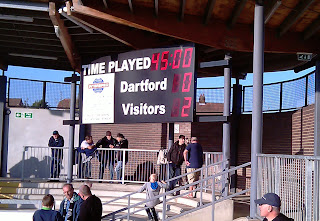 Dartford Forum reactions:
MINTY61
Where to start ! When the pass back was played to Andy i almost looked away, knowing what he's like with them.

He should have just hoofed it away instead of trying to trap it, he's not good enough to do that. I'm surprised our defender even had the confidence in him to do that. Then an unfortunate own goal gave us a mountain to climb.

The farce with the officials just compounded the situation and the Truro players took advantage of the change of officials. They tried to get every foul they could possibly get and break up the play.
They say one man doesn't make a team but missing Charlie was a huge hole to fill. Playing Danny up front on his own was a mistake.

He's no target man and that's not his game. If you are going to play him up front, you need someone to hold the ball for him as he's not that type of player like Charlie.
Truro are the worst team to visit PP this season and apart from the first goal which was Sunday park stuff, they didn't have a shot on goal ! We had plenty of chances and if Charlie had been playing he would have probably scored at least one ,but he's gone and we have to get on with it.
It's going to be an interesting week coming up. Thurrock on Tuesday and FA Cup on Saturday.
I think Andy Young should have a few sleepless nights coming up as that was an awful mistake he made and its not the first time he's done that, this time he got caught out.
IF IN DOUBT, KICK IT OUT !
C'mon Darts, put this result behind us and get 3 points on Tuesday. We can't let Charlie going ruin our season, it's too early !
MOTM, between Burnsy and Rodgers for me !
SILVERADO
Did not having Charlie any more make any difference today? Well, difficult to tell when you've managed to commit double hari-kiri in the first 6 minutes! What his absence did show, though, was that playing Danny Harris as a lone striker didn't work - at least not today: the service to him was just not good enough. Too many long, hopeful balls all match and a total lack of cohesion because of TCFC's harrying.

I'm not sure the match would have been played the same way if there hadn't been a change of ref, but at times it threatened to get needlessly nasty, and it was little wonder that so many cards (ca. 7 yellow and 1 red) were brandished - most when we were fighting to get back into the game and the Truro players were milking every DFC foul for all they were worth. I wonder if the keeper has recovered yet from the GBH inflicted on him when he landed awkwardly?

Not wanting to dwell on the match, which is something I would like to draw a veil over, I'm glad I'm not booked for the end-of-season return match. because I'd hate to see such a lot of cheating, whingeing time-wasters again (he said with his mouth full of sour grapes).

But once again the Darts simply failed to perform as we know they can do. Boreham Wood and now this - enough, please!!!
LOL
Charlie has gone, let's get over it. Don't think even he could have got us out of that one. some days, things just don't go your way.  I don't think Andy deserves harsh criticism, he should have been a bit more awake early on for sure. 2 up after 7 minutes should have been a cruise for Truro and they should not have had anyone booked, let alone red carded. Their antics let us back in to the game, and we dominated for long periods to no avail. Jacob Erskine is a big target up front, but I hope we don't go for long over the top balls to him. Or is that what he wants? Time will tell. Hopefully today was a blip, and Thurrock will suffer for it on tuesday. And Bromley next saturday!!
Posted by trurofans at 17:41