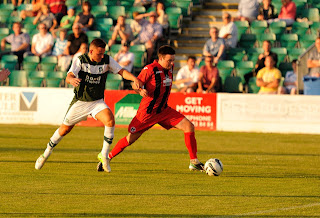 The visitors had looked to have snatched victory on a glorious evening when Tyler Harvey dispatched an 83rd minute penalty, after Plymouth referee Adam Bromley had spotted a City handball following a goalmouth melee.

But that would have been tough on City and the sub with no number on his back, Vickers ( who was formerly at Argyle), then wriggled his way into the box before being felled and he got up to put away the spot kick with aplomb, to ensure honours ended even.

It was another promising display by City’s new-look side, who were wearing for the first time their new “traditional” red and black away strip, as they prepare for life in the Calor League premier division, with their first game at home to Bedford Town on August 17.

The home side had suffered a double pre-match blow when skipper Jake Ash and young former Plymouth Argyle striker Jared Sims had to go home because of illness.

But they shrugged off the disruption and began brightly, with the lively Liam Eddy twice finding the net, only two have his efforts ruled out, first for offside and then a foul in the build up. He was also denied by a fine save form Andrew Hannah in the Argyle goal.

Plymouth also suffered a setback of their own when the highly-rated Matt Lacointe had to hobble off after colliding with former Argyle team-mate Ollie Chenoweth who went on to make a good save to keep out a Harvey strike.

In the second half both sides made changes, which rather disrupted the flow of the match though both teams had chances, with Truro substitute Charlie Young shooting into the side netting from a Neil Slateford cross and Harvey missing the target when well placed.

But the game looked like ending goalless, until those two late penalties gave a good sized crowd of 576 an exciting finale to what had been an entertaining match.