TRURO City have not been used to losing over the past six seasons as they have steamrollered their way up the Pyramid system with five promotions.

But they go into Saturday's home game against fifth-placed Berkshire visitors Maidenhead United (3pm) bidding to end a run of three successive defeats – the latest a 1-0 home reverse against struggling Dorchester Town on Bank Holiday Monday.

It is their worst run since Steve Thompson was briefly in charge.
It is also uncharted territory for City boss Lee Hodges who has enjoyed virtual non-stop success since succeeding the hapless Thompson towards the end of the 2009-2010 season.

﻿ ﻿ And it is understood that Hodges has acted by strengthening his squad with the signing of much travelled former Plymouth Argyle striker Sam Malsom.

Since leaving Argyle the 23-year-old Malsom, who was a prolific goal-scorer for the Plymouth Argyle youth and reserve teams during Ian Holloway's time at Home Park, has played in Brunei, Latvia, Iceland and the Faroe Islands.

But it is thought that the Torquay-based striker now wants to stay in the country and Hodges has decided to give him a chance with City, though the club need international clearance before he can play.
Hodges has been looking to boost his injury-hit squad for several weeks and Malsom should provide him with more options.

Despite their poor recent run City are still a healthy tenth in the table and club chairman Kevin Heaney said the recent results had been a "reality check".

He said: "Six games in 16 days is a big ask for any team and we have had a few injuries.
"We always knew coming to this level we would find out a lot about ourselves and I am sure we will be fine.
"We have got to remain positive, any negative vibe is going to take you back further.

"After starting the season with three wins the expectation becomes enormous. "It's an awfully long season. I don't get too excited when we win and not too excited when we lose. It's about the whole season. If we can get used to this level and then kick on again like we did in the Southern League then we'll be okay.
"Its a big game on Saturday and we need a win."

And Hodges has challenged his squad to show they can compete at this level. He said: "They have been used to success at several leagues below where we are now. 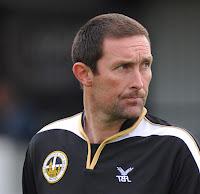 "And they have got to up the ante to stay at this level if they want to be in this team and play in this league."
Hodges was also unhappy with what he described as the spoiling tactics employed by Dorchester.

He said: "They were a spoiling team. People come to be entertained and you cannot entertain them if the referee allows them to slow game down. But that is not an excuse.

"The boys look a little bit low and possibly lacking in confidence. There have been a lot games in a short space of time.

"We are not getting the rub of the green at the moment but we have to pick ourselves up. We will train on Thursday night and I will pick a team to hopefully win the game on Saturday."
Posted by trurofans at 16:54