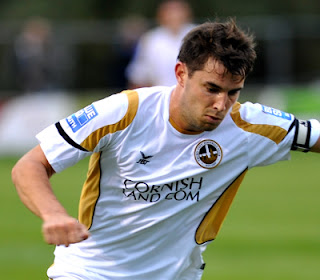 TRURO City skipper Jake Ash admits the club's well publicised financial situation has had an effect on the squad but said they would put all that behind them when they travel to Bournemouth on Saturday in the FA Cup.

Victory over the Sydenhams Wessex League premier side in the second qualifying round tie would earn City a welcome £4,500, with the promise of more to come.

City have never got past this stage in the cup, but victory at Victoria Park would give the club a major boost.
Ash, who is unlikely to play because of knee problems, said of the club's financial situation: "It does affect the boys, but once you get on the pitch you forget about it. The uncertainty though does not help.
"It does play on the back of your mind. It is a tricky time, but the players have got a great bond and are sticking together.

"We have all got a job to do and hopefully everything will get sorted out.

"A win on Saturday would be great financially and for the supporters and players."
Although Bournemouth – nicknamed the Poppies – play three levels lower than Blue Square Bet South City, Ash is expecting a difficult game.
He said: "There are always some shock results in the competition and we have to make sure it is not us on the wrong end of one.

"It is not too often that we go into a game as favourites but I am sure we will be ready for it."
City will be without several key players through injury and suspension.
Both Barry Hayles and Barry McConnell will be serving one match bans, while Steve Adams (ankle), along with Ash, is also likely to miss the game.

City boss Lee Hodges said he was really looking forward to the game after what had been a difficult week.
He said: "I love the FA Cup and we will give it everything to get through.
"Bournemouth are three leagues below us, but that won't count for anything on the day.

"It has been a tough week, but they are a tight knit group and they will be all out to get the win."
Speaking of the club's off the field problems Hodges said: "My job is to pick a team to win the match, to get them to train properly and prepare the players as best I can. They are a great group of lads.

"We are in an OK position in the league but the main priority now is not the play-offs but to make sure we still have a club and stay in this league."

City's 1-1 draw at Thurrock on Saturday lifted them to tenth in the table – just three points of a play-off spot.
And Ash believes there is enough quality in the squad to challenge for promotion, if not this season, then next.
He said: "It is a difficult league but I am sure we are good enough to compete. If we can get into the top half this season it would be awesome. From what I have seen so far there is nothing to be scared about."

City fans will notice that their favourites are starting to look rather more hirsute than usual.
The squad has started a beard growing competition for the foreseeable future. Ash said the reasons why they started the competition would "remain in the dressing room".

"Some like Barry McConnell and Tom Brooks are finding it more difficult than others," he said.
"There are a few ginger ones, while we are calling Broady (Joe Broad) Gandalf as his has turned a bit grey."
Posted by trurofans at 08:23