TruroFans caught up with Truro City Captain Jake Ash and new Goalkeeper Tim Sandercombe after the Eastleigh game on Tuesday.


“Jake, six points out of six, it couldn't have been a better start?” 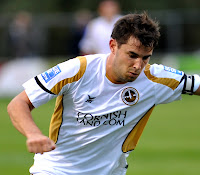 “I think we were underdogs coming into this evening and will be wherever we are in the league. And i think that will still be the case, teams will think, they’re up there but we can still knock them off there perch. We weren’t 100% tonight and know that we can play better, we were under the cosh tonight and will be a lot this season as we are playing good sides. When we were under pressure today we battled on, put bodies in front of the ball and on the line so that they couldn’t get past us. It’s a great start but there’s a long way to go.
“Any major concerns with the way the goal was conceded, from a high cross?”

“When you play against sides at this level, they’re going to have giants and its going to be difficult to defend against them. As Tim plays more games he will get more confident and so it is  not a big concern, but we are always mindful of how we can improve.”
“Once again, there have only been a few new signings and so there must be pretty strong bond in the squad. What is the teams' belief for how far they can go this season?"
“ We dont talk about it, no-one sets particular targets but we all know each other and I believe that this squad can play two leagues higher. I know supporters want to see new players but we have something special and if we are struggling Hodgey will look at it in January and bring in people if he sees fit. We have great quality on the bench and so no-one is bothered about lack of signings. We have a great bond in the squad and I think teams will be surprised at how much of a together unit we are.”
“Tim, welcome to Truro City. You are one of only two new signings, how hard is it to fit in to a squad that has been together for so long?” 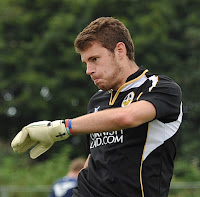 “To be frank its quite daunting coming in, especially a team who’ve bonded over so many promotions. That said, they have been open and I feel part of the team already. The away trip to Chelmsford meant we spent a lot of time together on the coach and so I'm quite happy.
“Two wins out of two and a clean sheet, how have you felt in these two games?”
“Saturday was really good, playing in that heat, there was nothing wrong defensively and to go up to one of the hotly tipped teams and turn them over 1-0 at the ground was great.Today I personally would have liked to have done a lot better, there were a few close shaves and so it was not ideal from my point of view but for the team, we got the win.”

Thanks to Jake and Tim for giving up there time to give these interviews. I Am hoping to speak to all the players and backroom staff throughout the season, so if you have any questions leave a comment below or email trurofans@gmail.com

Email ThisBlogThis!Share to TwitterShare to FacebookShare to Pinterest
Labels: Interviews