From nervous anticipation to bangers and mash! 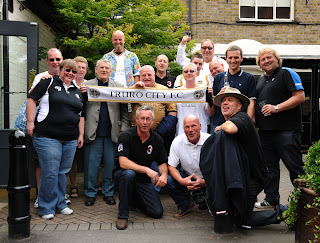 IF you enjoy watching football, you'll know that feeling. The pre-season friendlies are over, nervous anticipation creeps in and you can't wait for the new season to start.
Saturday 13th arrived – maybe not the best day if you're superstitious – and for Truro Independent Supporters' Association (TISA) diehards who had eagerly looked at the new fixtures for our first season in serious non-league – ie Blue Square South, the first game was the long haul away to Chelmsford City, one of the pre-season favourites, so no pressure then.
For those who travelled to support their beloved White Tigers it meant a 6am start from Truro. On the way up to Essex, we held a sweepstake in the car to predict the score for the Chelmsford game – not one of us was correct.
Four hoped for a draw and three predicted defeat, their caution maybe stemming from last season's opening day 3-0 home defeat at the hands of Chesham. Oh ye of little faith. Arriving at Chelmsford unscathed via the dreaded M25, the immediate impression was of a very well run club, albeit currently playing at an unusual venue, the local Sport and Athletic Centre, with both sides of the pitch separated from the fans by a running track.

The first half seemed to fly by with relatively few chances created from a solid midfield battle. The second period continued in much the same vein, although gradually each side began to exert more pressure on the opposition's defence.

First Cornhill for Chelmsford then Barry Hayles for Truro went very close, but then the home side's talisman skipper, Dave Rainford, a goalscoring midfielder like our own Marcus Martin, was dismissed for a second yellow card and Lee Hodges upped the anti by sending on Dan Smith, who immediately started to give the home defence problems with his trickery.

Cometh the 80th minute and ecstasy for the Truro fans. From a defensive ricochet, Smith reacted well and smashed a great shot past Searles in the home goal. Cue for grown men, who should know better to hug and kiss each other or dance little jigs (with apologies to our embarrassed wives watching the highlights).
Even the Chelmsford steward keeping an eye on our unruly band of generally middle-aged men commented to me what a great goal it was.

A nervous final few minutes followed for the TISA fans wondering if the Tigers could hold on, then bliss at the final whistle. Well done boys, great result.
However, our day wasn't over. As we trooped back into the excellent clubhouse, home officials had a pleasant surprise for us. I'm sure many of us non-league devotees have chuckled at the 'Groundhopper' feature in a certain well known non-league football paper.

For the uninitiated, the writer visits grounds across the country commenting on the welcome, the tea hut, clubhouse and, last but not least, the action.
So, having just relieved the home side of their unbeaten record for the new season, to be offered and served by the Chelmsford chairman no less, a hearty meal of bangers, mash and peas before the long journey back to Cornwall was quite a shock. Wonderful hospitality, although in truth I'm sure we felt a bit guilty after beating them. So, well done Chelmsford City FC. We salute you, top marks.

The vociferous away fans, primarily TISA members, were greatly appreciated by the team and manager Lee Hodges who later said: "The travelling supporters were brilliant at Chelmsford and hopefully they will turn out in good numbers on Tuesday and give the players the backing that they deserve."

Membership of the Truro Independent Supporters' Association is just £5 per annum and benefits include discounted organised away travel, a pin badge, fixture card, car sticker and access to key online fans' information.
Posted by trurofans at 18:51