Blue Square Bet South newcomers Truro City will be out to make it three wins out of three when they entertain Dover Ath at Treyew Road on Saturday (3pm).
But it is likely to be City's toughest test yet with the visitors the early season leaders after 4-0 wins against Dorchester and Thurrock.
City though will go into the game with plenty of confidence after their 2-1 midweek victory over Eastleigh, which followed their 1-0 opening day success at Chelmsford City. 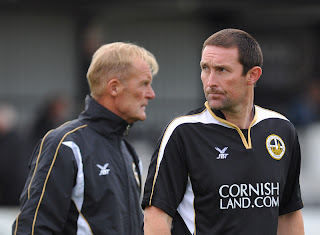 Truro manager Lee Hodges however, has injury doubts over Andy Watkins, who went off injured against Eastleigh, and Dan Smith who was injured in the warm up and was unable to take his place on the subs' bench.
Speaking of Watkins, Hodges said:" He didn't train last night, but is still hoping to be involved. A decision will be made shortly before kick-off.
"He over-stretched for a ball against Eastleigh and felt his groin go. We're hoping that it's nothing more than a little bit of scar tissue stretched. He's much better than he was immediately after the Eastleigh match. He's icing it up and doing everything possible to be involved."
Hodges said that Smith had suffered a seizure in the lower back during warm-up pre-Eastleigh.
"He had massage after the trip down and started the warm-up, but immediately realised he had no chance.

It's still a little sore, but he's hoping it may have settled down again for tomorrow. I've been talking him through things he needs to do and get. I'm something of a back 'expert' myself!
"I was out for a year with a back injury during my time with Plymouth Argyle."

Dover, who are managed by former Arsenal midfielder Martin Hayes, finished seventh in the table last season when they also reached the third round of the FA Cup for the first time.
Posted by trurofans at 18:18