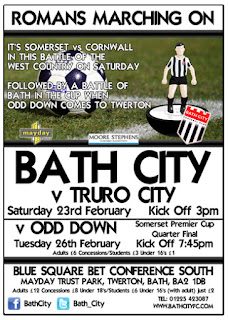 A superb 25-yard lob by City striker Andy Watkins looked to have given the visitors a precious three points, in what was an instantly forgettable game.

But City were undone when a flick on by Charlie Griffin found fellow substitute Josh Low at the far post and he hammered the ball into the roof of the net to break the visitors' hearts.

The previous 90 minutes was largely devoid of excitement and quality with neither keeper seriously tested.

In a first half there was little to excite the crowd of 574, which included around 40 hardy Truro supporters.

Truro also suffered a blow just before the half hour when Martin Watts twisted his knee and had to go off to be replaced by Ben Williams.

After the game Watts said he did not expect to be out of action for too long.

Watts had earlier shot over from long range, while the lively Les Afful stung the hands of Bath keeper Jason Mellor with a free-kick.

At the other end, Truro keeper Luke Payne, who had a very impressive game, did well to deny Elliott Chamberlain at the near post.

The second half was little better, with City surviving two penalty shouts for a handball against player-manager Lee Hodges and Ben Gerring for a challenge on Chris Allen.

But the game looked to be heading for a dour 0-0 draw when, out of nothing, Watkins beat a stranded Mellor with an audacious lob in the final minute of normal time.

And that looked to have settled the match, but not for the first time this season, City's defence, which had looked so solid, conceded a late goal, leaving them with just a point, though in truth a draw was probably a fair result.

They are next in action at home to Weston-super-Mare on Tuesday evening.


For ninety minutes this afternoon City and Truro City served up a whole-hearted, but desperately lacking in quality, game of football at Mayday Trust Park before two stoppage time goals produced a remarkable and unexpected climax.
The visitor's struck first when Andy Watkins produced a stunning dipping shot that flew past Jason Mellor and looked to have earned the Conference South bottom a rare victory. However, two minutes later City avoided the embarrassment of a second defeat this season against the White Tigers, Josh Low firing into the roof of the net after Gethin Jones had flicked on Aaron Brown's long throw.
In truth, neither side had done enough prior to this to deserve the win as City struggled to deal with the hard-working Cornish side, belying their almost certain relegation back to the Southern League at the end of the season.
Elliott Chamberlain shot against keeper Payne's legs after 15 minutes but this was as close as either side came in the first half. There was little change into the second period as City were reduced to a couple of optimistic penalty appeals.
As the game reached its final quarter Truro began to enjoy more possession but rarely looked to have the quality to make this count until out of nowhere Watkins - who had been linked with a move to City earlier in the season - produced a rare moment of class.
When Charlie Griffin had a close range effort cleared off the line moments later it appeared Truro would head back to Cornwall with the three points but there was still time for Low to pounce, much to the relief of the majority of the 574 crowd.