Tiverton Town skipper, Paul Kendall, 23, has signed for Truro City and is available to play today against Staines Town.  Kendall will be a welcome boost to the squad and he is expected to strengthen the team's defence. 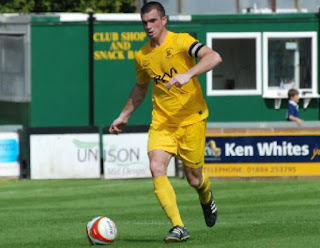 "TheTiverton club captain, despite his relatively tender years, Paul arrived at Ladysmead from Bideford in July 2011 and quickly established himself as a key part of the team. He had initially moved to Bideford having played in the Youth and Reserve sides at Plymouth Argyle and then with Dawlish Town, but his only season in North Devon was cut short when he suffered a broken leg in freak circumstances, ironically in a match against Tiverton.

Paul then missed the final five months of the season but despite his lack of action, Mark Saunders still moved to bring him to Tivvy. His early time at the club was hindered somewhat as he sought to regain full fitness, but by October he was back to full speed and proving to be a quality acquisition.

His influence and leadership on the pitch was rewarded when he was handed the captain’s armband, since when he has improved still further and can now be considered one of the most dominant and consistent central defenders in the league."

"The club would like to thank Paul for his significant contribution to the club while he was with us and wish him the best of luck in the future. Paul has said that he really appreciated the support he received from the club and fans and it’s with a heavy heart that he moves on.
The club would also like to thank Dave Kendall for his contribution to the club while his son was with us."

Welcome to Truro City Paul.
Posted by trurofans at 08:07