Lee is pleased by progress of Moore 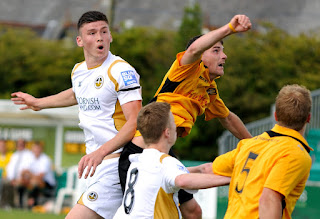 In the wake of Tuesday's agonising stoppage-time 4-3 Blue Square Bet South setback at leaders Salisbury City, Hodges said: "One of the big positives to come out of Tuesday's defeat was Kieffer's goal and second-half performance."

"He was always going to be on a learning curve in this first season at this level but in the past month or so he has been phenomenal.

"It's not just the goals and the way he has taken them, but it's also got a lot to do with the fact that he has started to grow into the role. He has taken a while to take things on board but I think the penny has dropped.

"He's 6ft 3in, good with his feet, and has scored a couple of cracking goals recently that show he knows where the back of the net is, and that's vital for a striker.

"He's also full of surprises. Watching him in the first half on Tuesday you may have thought 'he's OK' although in fairness, having reviewed the DVD, he did not get the best service. In the second half he was something special again, hard to handle and showed what he is all about."

Despite coming back from 2-0 and 3-2 down to level thanks to goals from veteran front-runner Barry Hayles, young Moore and fit-again Martin Watts, Truro were beaten by a stoppage-time Jamie White winner.

Hodges said: "It was a gutter. Conceding winning goals in stoppage time is always a blow and we had done so well to get back into the game, again and again. But the pleasing thing for me is that we gave the leaders a right good run for their money all the way."

Hodges played at left-back on Tuesday, after switching Ben Williams to centre-back alongside skipper Jake Ash. The Truro boss will have a one-match suspension to serve when City return to action.

The former Plymouth Argyle stalwart said: "It will be quite nice to get back on the touchline, managing the team from the sidelines again and having the time to look at the game from a different perspective, rather than being in the thick of it."
Posted by trurofans at 09:22