Truro City boss Lee Hodges says he wants to try and keep the bulk of his squad that played for him last season. 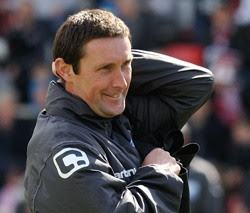 Financially troubled City are still under a transfer embargo which restricted them for much of last season as the club faced a winding-up order.

"I'd like to keep the nucleus of that squad and try and add three or four more fresh faces to it," he said.

"That's a good competitive squad of 20 or 21 that I'd like to feel could compete in this division.

"We didn't have enough bodies to get through to that finishing line last year, but all credit to the lads as we managed to survive and that was the aim," he added to BBC Radio Cornwall.

Hodges said he is trying to ensure that there is as little pressure as possible on his squad, and that his main aim is to consolidate their place in the Blue Square Bet South.

"We got 48 points last season, the aim's probably to finish higher than 14th and hopefully try and reach that 50 point barrier. I'm not putting any pressure on the boys, we know how difficult this league is.

"The bookies say we're second-from-bottom for the title, so they feel we're going to struggle, but I know what my boys are capable of and we'll go quietly about it.

"First and foremost the aim is to stay in this division as it's going to be a tough league, but I'm sure we'll fare a little bit better."
Posted by trurofans at 08:28