Defender wanted to stay at City

Story by Rhod Mitchell. This is Cornwall. LINK

BARRY McConnell, who was released by Truro City at the end of April after four highly successful seasons at Treyew Road, has spoken exclusively for the first time of his disappointment at the club's decision not to offer him a new contract.


The 35-year-old former Exeter City defender made 179 City appearances, scoring 21 goals (all but from one from the penalty spot), helping them to two promotions and a place in Blue Square Bet South, where they finished 14th last season.

McConnell started all but two of City's 42 games, as usual making the No 2 shirt his own.
And he said his time at City was the happiest of his lengthy career, apart from a couple of seasons at Exeter City.


"It was the happiest because of the players I was playing with who man for man I hold a lot of respect for and get on with all of them and I wish them every future success in their careers where ever that may be."

But he was the only player told he would not be offered a new deal – a decision which he says he still cannot fully understand.

He said: "I was told I was not fit enough. But I am fit as I have ever been.
Turbulent:

"My legs have not gone and I wonder whether there were other reasons behind the decision. I did think it strange I was the only player not offered the chance to stay. But that is football and the club's decision."

Last season was a turbulent one off the field for City, with their well publicised financial problems and McConnell was known to be outspoken on the situation, clashing with chairman Kevin Heaney, something which he thinks might have counted against him.

He said: "I would have loved to have had one more season with Truro. I wanted to stay and it was not a money issue.

"I think every player should have been given the opportunity to stay at the club after what had gone on during the season. I would have stayed if I had been offered a contract."

He was however full of praise for the City squad, a number of whom he said were better than he had played with and against in the Football League.

He added: "They are an amazing group of players and supporters there. At any other club the players would have walked away and the club would have folded.

"They were training twice a week and playing without pay. It was an amazing achievement to stay in the league considering all that was going on.

"I think without those off the field problems we could easily have made the play-offs.

"Kevin Heaney has spent a lot of money and the club on the field has come a long way in a short time. But off the field there is no infrastructure and they are miles away from what a club should be at that level."

McConnell was signed by then manager Sean McCarthy in 2008 and in his first season at the club helped them to the Southern League's Division 1 South and South West title.

After a season of consolidation in the premier division, City again won the title and with it promotion to Blue Square Bet South.

Looking back over his approaching 200 games at the club McConnell picked out last season's 2-2 draw at Sutton, when City travelled with just 12 players, and the 6-0 win at Salisbury City on their way to winning the Southern League Premier division title as his two big highlights.

"We went to Sutton with 11 men and a young boy and came within seconds of winning and at Salisbury, who were top of the table at the time, we all turned up on our game.

"That does not happen very often going to a top of the table side and winning 6-0. We gave them a beasting."

McConnell however, has no intention of giving up playing the game he loves and has signed for ambitious Southern League premier division outfit Weymouth.

"After I left Truro I realised I still wanted to keep playing. As everyone says you are a long time retired," he said. 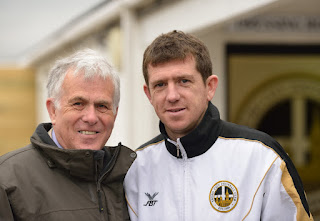 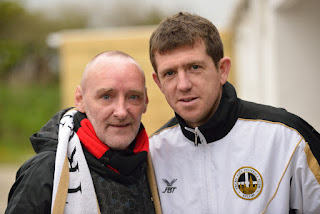