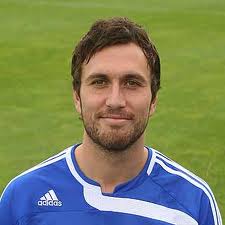 The Scottish forward was signed by then boss Ray Mathias for Conference Premier side Stockport County in the summer of 2011 but was released last week having not been able to force his way into the Hatters starting line-up this season and agreed a deal to leave Edgeley Park.
Thirty-three-year-old Gritton, who is currently studying for a career after football, will combine playing for the Cornish outfit whilst continuing his studies.
Gritton was released by League One side Yeovil at the end of last season after making just two appearances following his move from Chester City in March 2011.
He had previously played under Mathias during a two-year spell at Macclesfield from 2007.
Glasgow-born Gritton has had spells with several Football League clubs, most notably scoring twenty-five goals in his first spell at Torquay from 2002 to 2004.
He also turned out for Plymouth, Grimsby Town and Chesterfield.
LEE's view (as per City Alerts):

"This has been very much a last-minute thing, with Martin's release plus my own groin injury.  I'm going to be out of action for several weeks, which meant that in accordance with the present transfer embargo terms I was able to bring in another player to bring the squad size back up to 16.  I spoke to Martin and he immediately made it clear that he'd like to come and help us.

"He's a local lad, of course, and it will be great to see him back in Cornish football.  I think he's played something like seven or eight matches for Stockport this season.  If he comes in and does a good job for us, then we will also be looking at the possibility of inviting him to re-sign for us for next season.

"He's a good size for a striker and he's hard-working.  He knows a few of the boys already and it will be nice to have a new face in the changing room.

Hopefully, his signing will be a real tonic for us at a crucial stage in the season, when we're targeting at least two more wins - six more points - which should ensure that we stay clear of relegation."