Lee Hodges reckons City are one win away

Lee Hodges believes his Truro City side are just one win away from securing their place in Blue Square Bet South for next season, following last Saturday's crucial 3-0 home win over bottom club Thurrock. 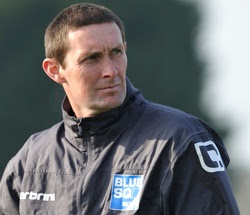 The Tigers' boss is hoping his team can pick up those points when they travel to second-from-bottom Staines Town on Saturday.
Hodges said: "I've always maintained we need forty-five points, and after Saturday we have forty-two. There are six games to go, and we want to finish well."
City beat Staines 2-1 at Treyew Road in January, coming from behind, thanks to two goals from Andy Watkins. But the Middlesex side will be buoyed by their unexpected 4-0 win at promotion-chasing Dover Athletic last Saturday.
However, Hodges believes the pressure is all on Staines who are seven points behind City. "They need a win more than we do," he said.
"I've been delighted with the way we have played in the last couple of matches and we have got to keep that going." Hodges may have the rare luxury of being able to travel to Staines with a 16-man squad.
Defender Steve Adams, who missed the Thurrock game with illness, is set to be available, while Watkins, who was on the bench but in no fit state to play because of a chest infection, is also due to train this week
Up front, the arrival of the vastly experienced Martin Gritton has given the squad a much-needed boost and, with Plymouth Argyle trainee Isaac Vassell also impressing on his two brief substitute appearances, it gives Hodges some options in attack.
He said: "I don't know whether I will be lucky enough to get sixteen, but at least I have some options. Grits has given the squad a real lift and he takes some of the pressure off Barry Hayles."
Source Western Morning News
Posted by trurofans at 08:36