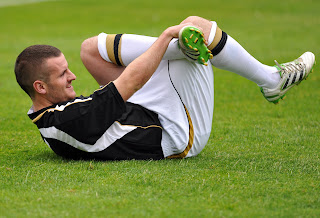 Truro City striker Stewart Yetton will be missing for another two weeks after suffering a setback in training as he tries to recover from a knee injury.

He has been out since the 2-1 loss at Farnborough Town at the start of December but was set to return.
"He closed the ball down and the ball hit him on the toe which stretched his knee out," manager Lee Hodges said.

"He's disappointed because he was desperate to get back as quickly as possible," Hodges added.
But the City boss said he did not think he would be out for too much longer.

"Stewart's back jogging in training so I don't think he's going to be too far away from getting back in the fold.

"It's part and parcel of the game and it's something he'll just get on with and he'll be back again very soon."
Posted by trurofans at 19:03