Tom Brooks' contract terminated at his own request

Just a day after Truro City extended the stay at Treyew Road for the rest of the season of on loan Plymouth Argyle keeper Ollie Chenoweth, the Blue Square Bet South Club have announced that another of the club's goalkeepers, Tom Brooks, has had his contract terminated at his own request. 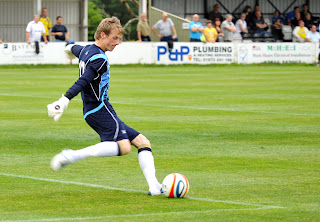 Brooks has made a few appearances in goal this season after injury ruled out first choice Tim Sandercombe, but then suffered a hand injury with Chenoweth being recruited from Argyle and has not played since.

City boss Lee Hodges said: "He has made it clear that he doesn't want to remain with the club and wants more time with his family. I won't stand in the way of anyone who no longer wants to be with Truro City.

"I am grateful to him for his service to the club. He has been a model pro. I appreciate it must have been a frustrating time spending such long periods on the bench, and I can understand that he would have wanted more game time, but that's football.

"He's still a young lad, learning his trade. Hopefully, he will carry on, get another club and maybe start climbing the ladder again."

It means City will probably not have a recognised reserve keeper for tomorrow's trip to eighth-placed Eastleigh who City beat 2-1 back in August.

Hodges said: "He (Yetton) trained last night and looked very sharp, but we had a chat afterwards and agreed it would be best just to give him a little bit longer.

"He's definitely going to be involved again at some stage in March, when we've got seven games and just a small squad. So we both felt it made sense to give it another week."
Posted by trurofans at 21:24