Truro City 2 v 2 Salisbury City
Treyew Road
3pm KO
THE MATCH REPORT
There was a blue sky at Treyew Road on this cold and nippy Saturday afternoon. When the fixtures were being made before the start of the season, this was the game that everyone connected with Truro and Salisbury was watching out for.  Especially after what has happened in the past couple of seasons.

This includes Truro travelling to Salisbury on a Tuesday night last season and thrashing Salisbury 0-6.  This was the turning point in the season which led to Truro being crowned Southern Premier Division Champions and being promoted to the Blue Square Bet South. However, earlier this season on another Tuesday night, it was Salisbury who got the better of Truro, eventually turning out 2-1 winners.
Onto the game, young keeper Ollie Chenoweth again started in goal because of the continuing absence of regular keepers Tim Sandercombe and Tom Brooks. New signing Adam Kelly started on the right side of midfield, hoping to put in a good performance in against his former club on his 24th birthday.
The young trio of Danny Carne, Scott Palmer and Cody Cooke were on the bench alongside the experienced Marcus Martin.
From the off it was clear to all spectators that Truro were here to play attractive and attacking football. And it was Truro who started the better of the two teams. Truro applied some early pressure, with Salisbury being on the receiving end of some good football from Truro.
It was in the 5th minute when the opening goal was scored. Truro’s no. 10 Barry Hayles managed to get his head to the ball and from about 8 yards about managed to send a looping header over the Salisbury keeper and into the back of the net.
It was only a minute later, however, when Salisbury were at the other end of the pitch, putting immediate pressure on Truro. This led to a mistake. The ball fell to a Salisbury player who was brought down in the box but referee Adam Hopkins waved away the huge appeal from the Salisbury players.
It was in the 15th minute when the next chance came about.  Barry Hayles hit a left footed shot which rebounded off the crossbar and cleared by the Salisbury defenders.
The game was 25 minutes old and it was the visitors who were starting to get the upper hand, keeping the ball in Truro’s half, forcing a couple of decent saves from Ollie Chenoweth. On the half hour mark Salisbury scored, with the ball rebounding off the post to a Salisbury attacker who was there to side foot the ball into the net.

With the score now 1-1 the game was more open, with both sides having chances, however, it was Truro who had the last say of the first half when Joe Broad sent a shot just wide from the outside of his right foot. 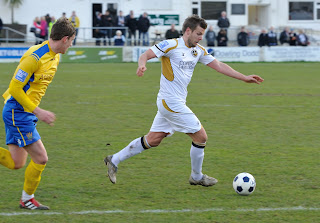 Into the second half and it was Salisbury who came out of the break the better of the two sides, with Truro having little possession. It was in the 61st minute when the first chance of the half came, with Salisbury forcing another save out of young Ollie Chenoweth.
It was in the 67th minute when the 3rd goal of the game was scored, much to the disappointment of the home fans.  It was Salisbury who deservedly scored with Truro looking poor.

In the 71st minute and Truro made two subs, Adam Kelly and Joe Broad gave way for Danny Carne and Marcus Martin. As usual, Marcus Martin made an immediate impact and caused a coming together in the middle of the field after a late challenge on a Salisbury player.  Players from both teams had to be restrained by fellow players on the pitch.
In the 81st minute there was another coming together in the middle of pitch, this time after Salisbury’s prolific goal scorer Robbie Matthews appeared to have elbowed Arran Pugh, which led to Matthews being sent off.
In the 83rd minute a Salisbury attacker went down in the Truro penalty area, but he was booked for diving.
The game had entered stoppage time and then came what proved to be a big decision from the referee. Barry Hayles was chasing a ball down and the Salisbury keeper came out and collided with Hayles. The Truro players, staff and fans cried for a penalty.  The referee responded to the appeals and pointed to the spot. The decision left everyone connected with Salisbury fuming.  Up stepped Scott Walker and he powered the penalty into the top right hand corner of the goalkeepers net. 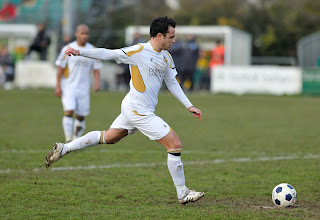 That was the last action of the game, with the referee blowing for full time.
ATTENDANCE: 590
MOTM: Barry Hayles – He played a part in both of Truro’s goals, scoring the first and setting up the second. He used his strength effectively and bossed the Truro attacking line, looks like he is getting back to his best.
Posted by trurofans at 21:44