The disappointments of Welling’s festive period were put behind them as they cruised to victory over a Truro side over reliant on the offside trap.

Doubts over who would provide the goals should leading scorer Andy Pugh complete his move to Cambridge United, and Loick Pires remain sidelined with a knee injury, were dispelled by some excellent finishing. As a result, new signing Warren McBean may have to wait a little longer before making his Welling debut. 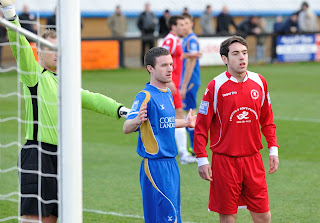 Early defensive duties by Jack Parkinson were required before Jack Evans was instrumental in Welling’s first attack when he beat Truro goalkeeper Tom Brooks and laid the ball off to Cumbers who hit the side netting from a tight angle.

Joe Healy then pulled the ball back to Jamie Day but the Welling player-manager fired over.
Roles were reversed when Day played the ball over the top only for Healy to see his effort blocked by Brooks. 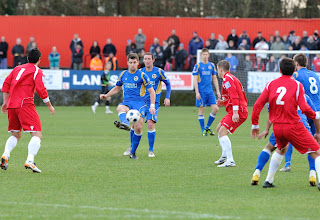 After Clarke had to leave the field for repairs to a head injury, only desperate defending by Arran Pugh prevented Welling from going ahead. After Healy saw an effort stopped by Brooks, both Cumbers and Healy saw follow up efforts cleared off the line by Pugh.

Day had a free kick saved by Brooks after Steve Adams had fouled Cumbers before Welling went ahead.
Cumbers sprung the offside trap but was brought down as he attempted to round Brooks. Referee Anthony Coggins blew his whistle immediately despite a prone Cumbers hooking the ball into the net. After a lengthy delay for the referee to book Brooks for the foul, and Truro’s player-manager for dissent, Clarke stepped up and sent the City goalkeeper the wrong way.

Great control and a perfect pass by Andy Sambrook gave Day and Healy the chance to combine and play in Jack Obersteller but he was thwarted by an eager linesman’s offside flag.

It took Welling just four minutes in the second half to double the score.
Obersteller’s free kick found Ben Martin but as he was pulled back in attempting to shoot, Cracknell was first to the loose ball and he crashed the ball into the net.

Evans was cautioned for a foul and Andrew Watkins talked his way into the referee’s notebook before Scott Walker fired the free kick over the bar.

Welling had claims for another penalty when Pugh appeared to handle Healy’s shot after Cracknell had pulled the ball back. 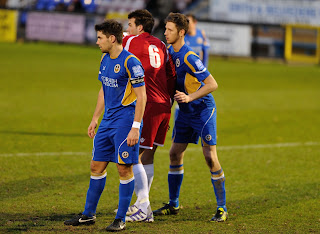 First Cumbers was allowed a free run on goal and he made no mistake, slotting beyond Brooks into the back of the net.

Then Obersteller was put through and his lob over Brooks was chested home by Cumbers.

Finally, Cumbers again broke free down the right wing and his deep cross was headed home by Cracknell at the far post.

Loui Fazakerley, returning after a long term injury, and Ryan Dolby then came on for Obersteller and Healy before Tamer Tuna replaced Cumbers.

Brown’s hopes of keeping a debut clean sheet were thwarted when Fazakerley was adjudged to have fouled Jake Ash in the penalty area and Walker despatched the spot kick straight down the middle.

An offside flag came to Truro’s rescue when Day’s lob went into the net following Cracknell’s through ball before Ash fired over for Truro.

In the dying minutes Clarke was cautioned for a foul.
Posted by trurofans at 19:01