A day trip to Bromley

The secret diary of a TISA fan, aged 50 and three quarters.

I'm sure this has been written a thousand times before but here are a few notes on a typical away day, this time to Bromley.

Before I get into any detail, my own aim this season has been to follow City on as many away games as my wife will allow.

Typically in the build up to the pressure pot of Christmas, I was asked if I was "doing every game" - I said yes and was then sort of forced into agreeing to restrict this to one a month.

However with Christmas out of the way, life being more-or-less normal again, I have stretched my luck, and am seemingly back on a roll again.  The last away game I missed was Sutton United on a Tuesday night  before Christmas.

Back to the Bromley trip.  I'm on it.  As nearly all away games are in the south east, the logistics have been timed to perfection.  We know when to leave, where to stop and know which pub we will meet at.  The internet has made this all quite simple with our own local beer-boy ensuring the correct barrell is in place before travelling (aka SteveC).  With GPS' (Dave Kent Grimshaw) guiding us to within a few yards of our destination, what could go wrong?

The journey kicks off at 7am from Treyew Road.  Tommo is the driver for the day and is happy to do the full ten hour shift.  Nice. Good ole boy. That gives me a chance to catch up on a couple beers as I did the full stretch to Welling last week.

First stop on the way is St Erme. The John-Ross boys are not immediately obvious, desite their ample size.  For some reason only known to them, they decide to hunker down close to the hedge and not in the near layby?  Anyway, the're on board.  Ten minutes later, a quick stop at St Columb and our Social Secretary Dave Grimshaw is on board - queue the first tinny at 7.30 am.  A nice can of Red Stripe.  A long conversation ensues on where certain beers are brewed.  Who cares.  We've got five hours in the car where seemingly any topic is debated. 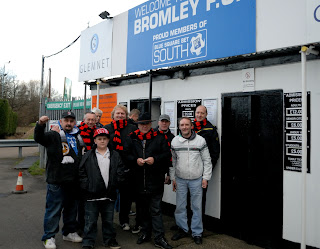 The early exit from the Duchy is stormy and very windy,  not least outside but inside the car as well. Enough said.  Our Rangers contingent of one has also had a few beers the previous night and descends into a coughing fit.  Half a bottle of benyline seems to settle him in the cheap row.

The half-way stop at Cartgate services, Yeovil, beckons for a natural break and The John-Ross stomachs require more burgers. On the move again and we pass Stonehenge.  Queue the expected pagan conversation from Tommo, this time suggesting that next season's crop-circles should be shaped in a Tisa logo.

It's now 11am and the beer has finally run dry.  The last services before the M3  require a quick stop to refuel in more ways than one. Fully loaded, we head for the M25.  New songs are born and discussion centres on topical subjects of the day, such as transfer embargo's, tax bills, depleted squads, a new Saint in the making (Lee of course) and the merits of living in Kent or Essex.

We soon pull into Bromley and the Bricklayers Arms looks like a temple.  We're greeted at the door not by the landlady, but Steve and Vicky Clark.  The Sutton contingent with a sprinkling of Cornish heritage bring something to the party, not least some colourful language previously unheard of in Cornwall. ;-)

After several Spitfires, BSS conversation with pre-arranged Bromley supporters, a few more songs and we're on the move again directly to Hayes Road.  The approach to the stadium is a cross between a farm track and a private drive, flanked by some stables and overweight horses.  The assembled fans inside this old ground are friendly, welcoming and courteous; nothing less really than the we have found at every away game this season. Brilliant. 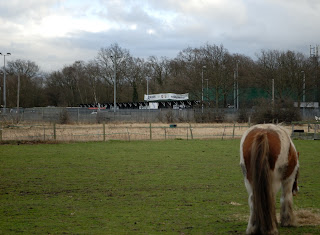 The game yields a very welcome point, our first from four matches.  A quick statto check shows that after eight games we are 18th in the league - not good and an obvious result of a lengthy transfer embargo taking its full, devastating effect.

A couple more beers after the game and knowledgable conversation from the gaffer himself reassures all that morale is high within the small squad.  I managed a rare chat with Kevin, clearly happy that the tax bill was settled but not needing a reminder that the embargo was the next priority (sorry, mate - had to be said).

Onto the next chapter and this has to be the most bizarre scenario of the day.  A quick stop at The Charging Horse pub and I assumed that a fancy dress party was order of the day.  People dressed in Germanic costume later revealed that I was chatting to some sympathisers on a White Supremacy reunion.  Ouch. Another quick Courvoisier brandy to celebrate Grimmy's birthday and we were off....

Another stop at Fleet services for some KFC, more reminiscing of the match, replenishment of those bellies and we were finally on the last leg home.

With voices fully lost, Danny Humphrys decides to squeek out an hours worth of chat as if he'd been drinking helium all day.  Sadly I missed the fun as I slept most of the way home.