"I felt we had done okay in the first half; we created two or three decent chances, but needed someone to get on the end of things. The first two goals for Welling changed everything but were very controversial in our view.


"For their first goal, they put a cross in and one of their players deflected it on for another boy who was definitely ahead of everyone. Then, on the end of that, we conceded the penalty. I asked Tom Brooks if he had brought him down and he said: 'No, I palmed the ball away and he fell over me.'

"So we went in at half-time having just gone 1-0 down at a crucial time with a penalty that wasn't. For the second goal, there was a coming together of Arran Pugh and one of their players and the ref was right there on the spot but let play go on, but the linesman, who is 25 yards away, then indicated a foul and they scored from the free-kick.

"Then Les Afful was clear on goal when he was blatantly brought down - last man - but the offender only got a yellow card. I'm not saying we would have avoided defeat if these decisions hadn't gone against us, but there's no denying the officiating left an awful lot to be desired. They really have to get such important decisions right, and they didn't in this match. 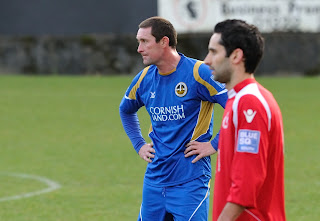 "Welling are a good team and they're right up there in second place in the League for a reason, but I was pleased with the effort put in by our own lads. At half-time, we were just disappointed with the goal we had conceded but felt that we were still very much in the game. After the interval, I don't think we performed to the levels we had done in the first half, which was a bit disappointing; we never really recreated the same intensity.

"I decided to bring on Marcus Martin for myself as he is always more likely to come up with a goal or two. It didn't work on this occasion, but at least his ankle came through okay despite a couple of strong tackles, which was a plus. It was also good to see Cody Cooke back on the pitch. He's been back on the bench after some good performances, so it was good to give him some more game time and he will be in contention again on Saturday."

CITY ALERTS is the official Truro City Football Club news service for supporters and media. It is sponsored and operated by Mike Truscott of Golden Replay Biographies (www.goldenreplay.com). Ten per cent discount for City Alerts subscribers registering for this service.
Posted by trurofans at 18:13