City Alerts - "We stopped the rot" - by Mike Truscott

"We stopped the rot.  Once you lose three in a row, you start to wonder where the next points are coming from, so this was quite a big game for us.  I can't say we were outstanding, but it was good to go ahead and have something to hold onto for a change.  In the last few games, we have been chasing it. 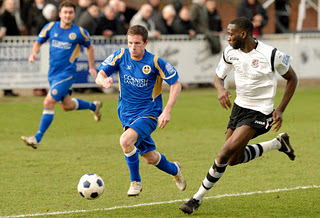 "Bromley probably dominated the first half and we had the better of the second.   We each had a couple of good chances in the first half and the goal that put us ahead wasn't even a full chance, really.  Andy Watkins did well to bring down a long ball;  he was fouled and then scored with a bullet header to Scott Walker's free-kick.

"I was disappointed with their equaliser, which came from a throw-in on the half-way line.  Our centre halves didn't get close enough to their boy, who was allowed to turn and run at goal, and he finished well.  In the last 15 minutes, I thought if anything we looked the more likely to score, which was pleasing.  I stuck Barry Hayles on upfront and decided we'd have a go for it."

TRANSFER EMBARGO:   situation remains unclear, but hopes still centring on end of month for lifting.  ED PALMER speculation:  NO change in prospects of further loan spell - nothing doing for now.
KIEREN CONIBEAR-TRATHEN:  released from first team contract.  Lee:  "Kieren feels he is unable to commit to all that is involved in being a member of the first team squad.  He is still going to play for the reserves and I have told him that if his situation changes there is a possibility that I would  reconsider him for the first team squad next season."

Congratulations to JAKE ASH, MARCUS MARTIN and SCOTT WALKER on club appearances milestones on Saturday - 250th for Jake and Marcus and 200th for Scott.

Reserve players DANNY CARNE and SCOTT PALMER were in the squad on Saturday.  Lee:  "It was a good experience for them, and I told them afterwards that I was sorry I hadn't been able to put them on, but I just felt it wasn't the right time.  Hopefully they will get another chance, and the experience will put them in good stead."

CITY ALERTS is the official Truro City Football Club news service for supporters and media.  It is sponsored and operated by Mike Truscott of Golden Replay Biographies (www.goldenreplay.com).  Ten per cent discount for City Alerts subscribers registering for this service.
Posted by trurofans at 12:01