The "Wall of Sound" from our balding conductor 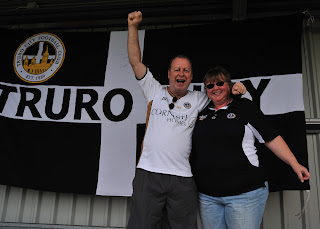 Really good night - good to see how the City players came over to the tiny knot of Truro fans after the game.

Special mention to the Truro City 'Wall Of Sound' -  Steve & Sean who gave it plenty throughout the match.
I did fear the worst before kick-off ,  so many injuries and just one on the bench - but what a performance.
All the City players were magnificent.

Spent first half near the wall of sound with kids- big thank you for modifying the song about Les!
Second half in the stand- kids were tired and needed to sit !

I agree, after city players went to fans in far side they also spoke and acknowledged fans near tunnel. Great humility and generosity from exhausted players.
Posted by trurofans at 09:44