Hodges Forced to Don the Boots 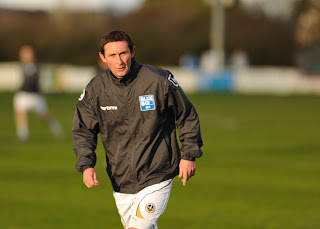 The 37-year-old play-anywhere City boss replaced on-loan Torquay United defender Ed Palmer during the second half of last Saturday's 3-3 home draw with Hampton & Richmond Borough. With Palmer ruled out of tonight's match at Gander Green Lane, Hodges is set to make his first start of the season for injury-hit City.
The experienced former Torquay and Plymouth Argyle player said: "One of the reasons for replacing Ed on Saturday was because I knew he had the suspension coming up. It also gave me the opportunity to get out there."
Hodges, who had not planned to start this side of Christmas, has had his arm forced by a spate of injuries.
Although skipper Jake Ash made a triumphant return to the starting XI last Saturday, top and tailing the scoring with a seventh-minute opener and a last-minute leveller, Hodges had to select from a squad of fourteen.
On the eve of tonight's game at fourth-placed Sutton, 4-3 home winners over second-placed Welling United last Saturday, Hodges admitted: "We are down to bare bones and I am just hoping that we get some of the injured players back soon."
City are set to travel to Surrey without up to six of their squad, five of them on the injury list.
Although Stewart Yetton has completed his one-match suspension, the former Plymouth striker is struggling with a knee injury.
Target man Barry Hayles – ruled out since the FA Trophy draw at Gloucester City – is recovering from a knee injury but is more likely to feature in the trip to Weston-super-Mare on Boxing Day than at Sutton tonight.
Hodges will also call on reserve goalkeeper Tom Brooks, as City number one Tim Sandercombe (knee) is still ruled out, while midfielder Marcus Martin failed a fitness test before the draw with Hampton and is unlikely to feature tonight.
Hodges said: "The lads did brilliantly to get something from Saturday's game and we will be looking for another special effort tonight.
"It doesn't need me to tell anyone it is not going to be easy, all anyone has to do is look at Sutton's result against Welling on Saturday and that says it all.
"But we won a hard-earned point on Saturday – Hampton won four in a row before playing us and had just come off the back of beating a Conference Premier team in the FA Trophy.
"They were the in-form team and expected to win again as well. We are still ten points clear of the bottom three and every point we pick up takes us further away from the bottom. This season was always going to be about finding out about the league – and ourselves – and where we fit in."
Posted by trurofans at 18:13