Images and forum comments from the Ebbsfleet FA Trophy game


jenglefield: After watching the game today Ebbsfleet scored a couple of good goals today, however a couple of goals were because of poor mistakes at the back! Despite the result I thought the lads played really well today, but they were simply outplayed by a stronger opposition that knew how to play good attacking football! The Cup runs are over for this season at least, but now they can concentrate on stabilising a good, strong position in the league!

The lads must be tired after the amount of hard work they put in every week, which is promising for the future after what has happened off the field in recent weeks, but we also need to keep the squad we have and try not to lose any players because the squad is as small enough as it is! Truro did miss key players today, especially Jake and Marcus in the centre of midfield and Barry upfront! However, I look forward to the home game next weekend against Hampton & Richmond hoping that Truro will get a decent result, as Truro are usually strong at home with the crowd behind them and the quality that they have on the field, what may help is that Hampton & Richmond are currently third from bottom, but as we have learned so far in this league we can never under estimate teams, whatever position they are in the table!

HMHB: Plus points, Couple of lovely finishes from Les, their keeper denied him another before half-time with a great save, thought an under strength Truro team gave a good account, having Marcus, Jake etc in the side might've made for a more even battle, good cameo from the gaffer second-half. Plenty of backing for the boys from the fans, erm, Ebbsfleet's kit was nice, got given a Spaceman 3 back-catalogue by a decent sort down the Railway Club (I owe him a beer).
Negatives, couple of good shouts for penalties turned down & a poor crowd - reason carpark was full is Sainsbury's staff are using it for the next couple of weeks, loads of cars when I drove past at 10am.

Gorranblade:  When I saw the teams warming up, I said to my mate Ebbsfleet had some big lads and they would dominate midfield and be dangerous from set pieces. How right I was but we didn't help ourselves in the first half by pumping loads of high balls forward. Fortunately Lee saw the same problem and in the second half we tried to keep it on the floor. As a result we were much more dangerous and caused them numerous problems. Trouble was, we missed some excellent chances and could have drawn level before their fifth goal.
Why doesn't Lee pick himself to start? As soon as he came on, we moved up a gear. Stop being shy Lee, you really should start next week if we are still carrying all those injuries. 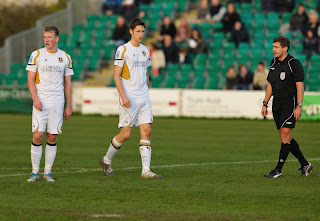 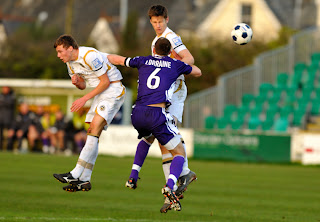