Match report and limited images of the evening are below.  Pitchside photo's of the game at this level are restricted by the FA to official papparazzi so sadly TruroFans will not being showing any close-up images of the players.  Around 170 noisy Truro City supporters were in the Barn Park end and enjoyed a decent game of football on a stunning pitch, in balmy summer weather. Attendance was 2271. 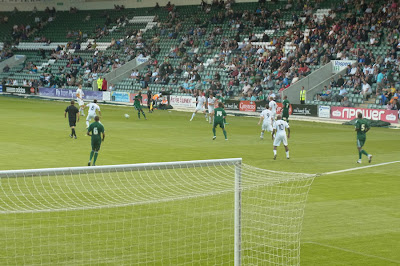 After some dominating play and taking a 1 - 0 lead through Les Afful, some defensive lapses in concentration later allowed Argyle to cut us apart at the back.  New signing from Torquay, Ed Palmer looks promising, Tim Sandersombe in goal looked impressive, Jake Ash had an excellent game with Marcus through the middle and the four forwards all looked on top of their game.  After five friendly games, if there is one area that Truro Fans would recommend tightening up on, it is in defense.  Otherwise, tonight was a solid performance and the lads should be well proud. 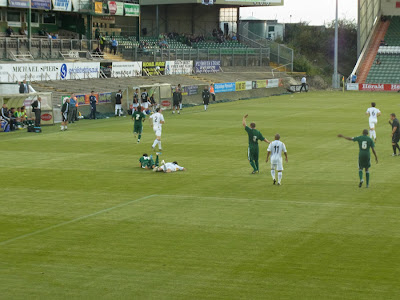 MATCH REPORT FROM DAVE1975 from Tiger Talk:
"Hodges should be proud of the boys tonight. They all put a shift in and at times outplayed their league counterparts. What was most pleasing was the commitment the players showed to win the ball back and pass it well when we did have it. Barry Hayles was so good I heard an argyle fan say he wished they had signed him for the upcoming season. Hayles and watto made it a torrid game for the argyle back four. Hayles was out jumping the 6'2" centre backs every time and they struggled with watto's pace. Marcus was solid in midfield and Andy Taylor worked tirelessly. Les afful was tricky but held on to the ball too long at times. Jake played well as did the back four. Ed looked more assured and will be a good addition to the team. Aaron and steve have formed a strong partnership and that was evident again tonight. Baz made some good runs down the right but got caught a couple of times. Sandercombe was brilliant in goal and helped keep us in the game on a couple of occassions. All in all, a very good performance by the team. Well done! " 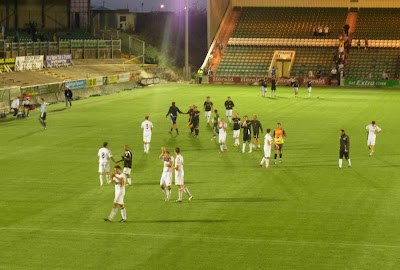 greensonscreen images Truro Fans images plus some action shots
﻿﻿ ﻿﻿﻿ ﻿
Posted by trurofans at 07:54

Email ThisBlogThis!Share to TwitterShare to FacebookShare to Pinterest
Labels: PAFC vs TCFC July 2011