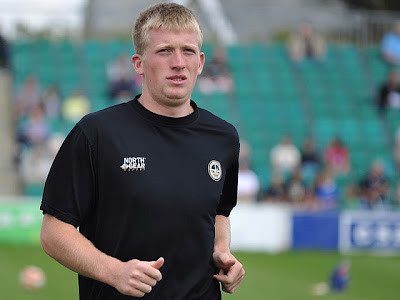 TRURO City boss Lee Hodges believes the arrival of imposing Torquay United defender Ed Palmer will provide some much-needed competition for Steve Adams and Arran Pugh next season, writes Lee Hall.
Hodges returned to his former club last week with an approach for the 18-year-old, who has joined City on loan until January.

Palmer made his debut in Saturday's 4-2 friendly defeat to a Queens Park Rangers XI at Treyew Road (match report page 108).
And as well as looking assured alongside Adams, after replacing Pugh at half-time, Palmer marked his first game for City with a stunning goal.

But it will be the teenager's defensive qualities that Hodges believes will bolster his options at the back.
He said: "We've got Ed until January so that will give us great competition.

"We've got Steve Adams and Arran Pugh at centre half and they haven't really got much competition in there so we've brought Ed in to make sure they're on their toes.
"Ed's a good size, I know him well from my Torquay days and he's come on and done ever so well in pre-season for Torquay..

"We're really pleased that they've allowed us to take him."
Saturday's defeat means City have now conceded 12 goals in four games.
Hodges said: "Everyone likes to win matches, I hate losing games, but you don't lose anything for it at the moment.

"If that was at the start of the season then yes I would be a little concerned, but it's not, it's about finding your feet again and getting the right balance for when the season does start.
"When you're swapping six or seven players around here and there it makes a difference to the game."
Posted by trurofans at 16:27