Cooke has all the right ingredients (West Briton)

STEVE Tully is confident that utility player Cody Cooke has a great future ahead of him – possibly even in the pro game. 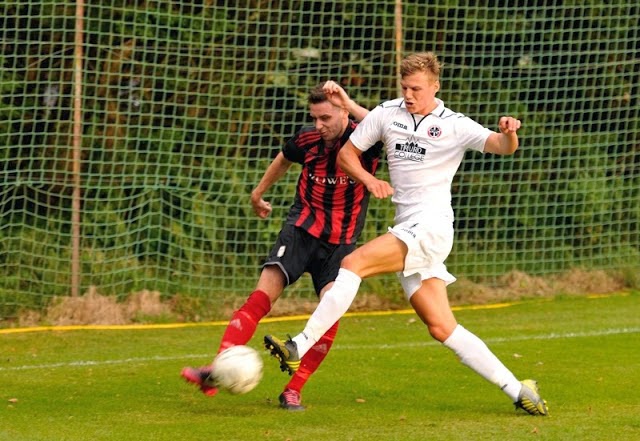 The 20-year-old from Penryn made his 101st City appearance in Saturday's 5-0 win over Banbury United, scoring the first goal, as he produced a man of the match performance in his new position of centre forward.
And the Tigers' new boss is confident that Cooke has it in him to play at a higher level, especially if he can establish himself in one position in the team.
He said: "I think he has probably suffered by being able to play in so many positions and being the 'go to' player."
Cooke looks set to continue in his striking role for Saturday's testing trip to play promotion-chasing Cambridge City.
Tully added: "Cody was looking sharp in training and banging them in from all over.
"He has a big future and can get noticed if he has a good season with us. It could be a stepping stone and we would not stand in his way."
With the backing of chairman Pete Masters, Tully is hoping to tie up Cooke for next season shortly, along with defender Shane White, having already agreed deals with keeper Grant Fisher and midfielder Dan Green for the 2014-15 campaign. Their signings are a clear indication that Tully and his assistant Wayne Carlisle are in pole position to get the job on a permanent basis.
"We need to get a good nucleus of a squad in place if we are to challenge for promotion next season," said Tully.
Jake Ash, Joe Broad and Ben Watson are already contracted to City for next season.
Tully is looking forward to the challenge of taking on fifth-placed Cambridge City and then Hungerford Town at Treyew Road on Tuesday.
"Cambridge will be a good test for us and we owe Hungerford one after they beat us 6-0."
Olly Brokenshire is set to be out for a couple of weeks with a hamstring problem, while Watson (calf) is rated as 50/50, though Joe Broad and Jake Ash are more likely to be available after injury concerns.
Tully has been looking to bring in replacements from Plymouth Argyle and Exeter City without success, but said he was happy with his squad.
"The players have a great chance to impress and earn themselves new contracts in our final eight games."