LEE Hodges wants his Truro City side to end a difficult season on a high with a good performance and result against Dartford at Treyew Road on Saturday (3pm) in their final game of the season. 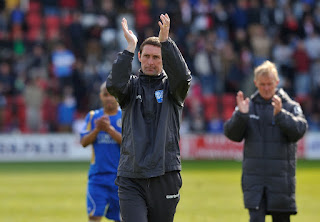 City finally and beyond all any mathematical doubt ensured their Blue Square survival with a battling 3-3 draw at champions Woking on Saturday (see page 124).

But Hodges does not want to end City's first campaign at this level with a defeat against the league runners-up who are involved in the promotion play-offs next week.

He said: "I am not sure how they will be approaching the game but all I am worried about is how we perform.

"It has been a fantastic achievement to ensure we stayed up with a game to go and the boys have done brilliantly.

"It has been a long slog and while we can relax a bit we want to finish on a high and send our supporters who have been marvellous all season away with a smile on their faces."

Hodges will then get down to the business of his squad for next season.

But one player definitely leaving is right back Barry McConnell. 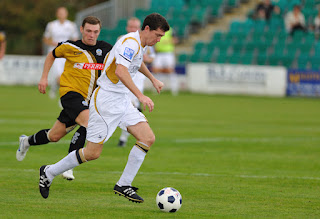 The 35-year-old former Exeter City defender has made 178 appearances for City since signing for the start of the 2008-09 season, scoring 21 goals, almost exclusively from the penalty spot.

This season he has been a virtual ever present in the No 2 shirt, making 39 league starts and one appearance from the subs' bench, missing just one game through suspension.

Hodges said: "Barry has been a fantastic servant but we felt it was time to perhaps go in a different direction and I am sure he will find another club as he still wants to keep playing."

"We are thinking what do we need for next season and have a plan of attack but I need to know the players' feelings."

For Saturday's game City will be hoping to complete a notable double against the Essex club, who they beat 2-1 earlier in the season.

But Stewart Yetton (suspended) and Marcus Martin (illness) are definitely missing, though it is hoped that skipper Jake Ash will have his stitches out from a head wound sustained in the game against Bromley and be available to take his place in the squad.

"Everyone will get a game," said a relaxed Hodges.
Posted by trurofans at 08:17