Cards on the table

Short preview of our last away game of the season at Woking:

With the Cards now confirmed as the league champions, and this being their final home game of the season, it is anticipated that 2,500+ spectators will be in attendance.  In other words, Truro City will be priviledged to attend easily the biggest game of the season.  The league trophy will be presented after the game.

A special 64 page edition of the Cards programme will also be available on the day at £3.  It will be a great momento in years to come.  The front page cover is shown here: 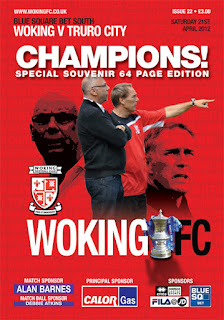 There will also be a big screen in the Cardinals Bar.  The Premier League match between Arsenal and Chelsea will be shown live on the big screen in the Cardinals' Bar on Saturday, kick off 12.45pm.
The bar opens at 12pm.  After the presentations on the pitch there will be showing footage of all Woking's goals this season, starting at approximately 6pm. Once this has finished the disco will start so the fans can continue the carnival long into the evening!  (I'm not sure if we will be waiting for that, but it sounds like everything is organised).