Truro City’s new Cornish signing!
We are pleased to announce that we have today registered Jamie Lowry to play for us after a short spell with Tiverton Town. Jamie is an experienced player having made over 120 appearances in the professional game. Jamie’s previous clubs include Crewe Alexandra, Chesterfield and Plymouth Argyle. Jamie can play in many positions but mainly as a defender. Jamie is a Cornishman, another home grown player and will be available for selection on Saturday.
Peter Masters
Chairman 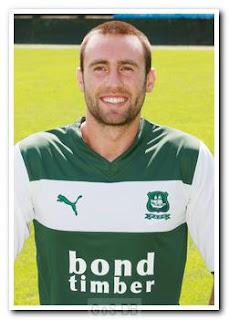 Came from: Chesterfield
Went to: Released
First game: 23 October 2012
Last game: 12 January 2013
Appearances: 11 (7/4)
Goals: 0
Lowry was born in Newquay in 1987 but escaped the attentions of his local professional club, instead joining Chesterfield in 2003 after his grandfather, a Chesterfield resident, recommended him for a trial. In 2006, after completing his scholarship and impressing for the youth team, he was offered a two-year professional contract. He made his full debut during the 2006-07 campaign, and over the following two seasons became an established member of the first-team.
Early in his career Lowry played at right-back, or as a right-sided midfielder, but later moved into a central midfield position. In October 2009 he suffered a cruciate knee ligament injury and spent 16 months on the sidelines. Unable to force his way back into the Spireites side, he moved on loan to Crewe Alexandra in November 2011, and made ten appearances in a two-month spell, before being recalled to the B2net Stadium. Lowry was released by Chesterfield at the end of the 2011-12 campaign, having played more than 120 times for the club, scoring eleven goals, and signed for Argyle in July 2012, following a short trial. Unfortunately, his Home Park career got off to a bad start when he suffered ankle ligament damage in a pre-season friendly at Truro City, meaning he would miss the start of the new season.
Posted by trurofans at 18:41