A brief history of The Aubrey Wilkes Memorial Trophy 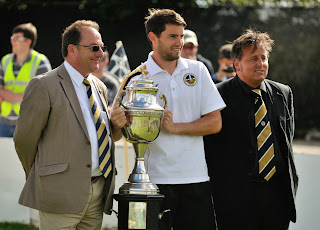 Back when the two clubs (Truro and Falmouth) were playing in the same league (South Western) it wasn’t too much of a problem to arrange this game, as in the early days it was competed for in their first competitive meeting of the season. However, nowadays it’s not quite so easy with three steps of the The FA's National League System separating the two clubs.

It’s understood Aubrey Wilkes was a great follower of Cornish football, especially Falmouth and Truro, hence the trophy being donated for the two to fight out for each season.  (Wilkes is also understood to have been a past Chairman of Falmouth Town.  The massive trophy itself is Spanish in design and was brought back from Spain whilst a Mr Chinn, a well known Falmouth supporter was on holiday there).

The first challenge was settled in the South Western League clash between the two on the 25th March 1989, at City’s Treyew Road and although things were level at half-time, Town pulled away after the break to finish 4-1 winners.

While Town’s scorers on the day, Phil Shapcott, George Torrance (2) and Chris “Dodger” Long, are now familiar names of the club’s famous past, Truro’s scorer from over 24 years ago is very much part of the present day set-up as it was first team manager, Steve Massey!

The following season, in fact only six months later, saw the Trophy come to Treyew Road for the first time after City won 2-1 at Bickland Park in a game that was also being played as a South Western League Cup First Round tie.

Dodger Long and Steve Massey both scored again, but another well known Cornish goalscorer notched what proved to be the game’s decisive goal – Mark Rapsey.

The two line ups featured many names that have and in fact still are involved in being managers at clubs throughout the county:-

Bringing the trophy up to date, the match scheduled for Tuesday should have been at Falmouth, however due to pitch problems, the game has been switched to Truro. This will be the 19th challenge of the Trophy, with the current winning stats being Truro 8, Falmouth 7 and 3 games ending all square.

The game on Tuesday kicks off at 7.45pm with the club hoping it’s going to be a real Christmas Special with Real Ales, Mulled Wine, Mince Pies and a Super Hog Roast all on offer.

It’s obviously a Cornish based trophy that not many know too much about, but thanks to Falmouth Town’s statistician Mike Odgers for helping me with some of the information.

By Dave Deacon and Steve Rogers
ps. if anyone knows more detailed info on the cup and its origins, please do not hesitate to let us know - we will then update the records.
Posted by trurofans at 10:46