“Truro City FC will receive £600,000 from Lidl so the club can temporarily relocate to continue training and playing while the new stadium is completed.”

Posted by trurofans at 14:12 No comments:

Posted by trurofans at 14:08 No comments:

A Day To Forget

It all started well enough with a train trip to Plymouth chatting with mates that were heading for Argyle. We had breakfast in The Tamar pub at Crownhill (nice pub, well run, very friendly)and a few drinks to wash it down.

Ever get the feeling you've been cheated? 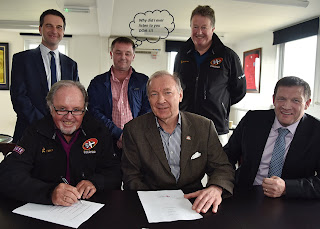 Watch this space, not the space between Pep's ears, for exciting TISA news in the coming days. #NPNP

Posted by trurofans at 19:08 No comments:

Truro Supporters Trust's Initial General Meeting will be held on July 10th, commencing at 19:00,in the Clubhouse at Treyew Road.
At this meeting committee members will be elected and people can pay their membership's and join the Trust.
There will be a member of the Clubs board in attendance to update supporters of the latest developments at the Club.
The Truro Supporters Trust are seeking nominations for the following Committee posts.
CHAIRMAN.
VICE CHAIRMAN.
SECRETARY.
TREASURER.
MEMBERS SECRETARY.
COMMUNICATION SECRETARY.
EVENTS SECRETARY.
TRAVEL SECRETARY.
2 COMMITTEE MEMBERS
Nominations should be sent to Barry Milligan. Phone: 07891 303 523. E.mail. bazmobile4@yahoo.co.uk.
Final date for nominations is JULY 3rd.
Nominations will only be accepted on the night of the meeting if vacancies are still vacant.
The Steering Committee is meeting on June 19th to finalise details for the IGM.
More information about the Trust can be found on, https://t.co/RXxuFlmMdo.
Posted by trurofans at 11:30 No comments:

All Truro City fans are invited to an open meeting on Thursday April 25th in The Central Bar, Truro @ 19:00.  The purpose of the meeting is to agree the format and organisation of a new supporters group.  One option will be to form a Supporters Trust and there will be guest speakers from Supporters Direct and the Football Supporters Federation to talk through that option and to answer questions.
Many people have expressed their desire for the different TCFC fans groups to come together and speak with a single voice in the interests of the fans, club and community, and the new owners have expressed a willingness for this to happen.  Forming a Supporters Trust would give the fans the most powerful voice as we enter this new era in the history of Truro City Football Club.
The meeting will be co-chaired by representatives from Truro Independent Supporters Association (TISA) and the former Truro City Supporters Club.  For there to be a new unified supporters group and for people to invest their time in setting this up and running it there needs to be a clear indication of support from the TCFC fan base and the best way to do this is come along in good numbers on Thursday night to show your support and join the debate.
Posted by trurofans at 13:52 No comments: